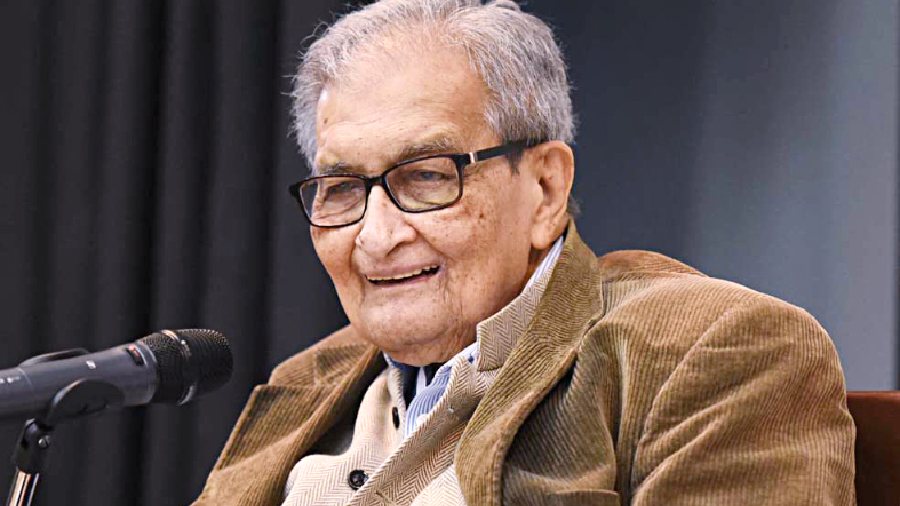 A senior faculty member of Visva-Bharati has said the allegation against Nobel laureate Amartya Sen that he encroached on the land of the central university in Santiniketan is an attempt by vice-chancellor Bidyut Chakrabarty to malign and harass the renowned economist, a fierce critic of Prime Minister Narendra Modi.

“The vice-chancellor is trying to please his bosses in Delhi by going after Professor Sen,” said the senior faculty member who didn’t wish to be named.  On Tuesday, university authorities had sent a letter to Sen, accusing him of the unauthorised occupation of a 13-decimal plot on the campus and asking him to “hand over” the land at the earliest.

Sen told The Telegraph that he had received the letter, which according to him was “frivolous” and had a number of “false statements”. The economist also said he was consulting his lawyers to draw up his next course of action.

“Professor Sen is not at all worried about this attempt to malign him.... You will get to know his plan of action soon,” said a source in Santiniketan.

While the economist spent a usual day at his home Pratichi in Santiniketan on Wednesday, the letter from the authorities was the topic of discussion on the campus and multiple sources said Chakrabarty was behind the directive to curry favour with the Centre.

Chakrabarty had been picked up by the Modi government to helm the university in November 2018. Although Chakrabarty assumed the charge with a promise of effecting a turnaround at Visva-Bharati, his tenure has been marked by controversies. There are allegations that he is trying to saffronise the varsity whose chancellor is the Prime Minister. A slew of disciplinary actions initiated by Chakrabarty against students, teachers and non-teaching staff also created an environment of conflict on the campus.

“Visva-Bharati vice-chancellor is in a tight spot since a letter of academics, including Noam Chomsky, reached President Droupadi Murmu.... The letter had highlighted how a series of punitive actions against students and teachers in Chakrabarty’s regime vitiated the academic atmosphere on the campus,” said a source on the campus.

“We have learnt that the series of court cases that the varsity got embroiled in recent years did not go down well with the Centre and there is a buzz that the ministry is contemplating some action against him.... By harassing Sen, Chakrabarty may be trying to save himself,” added the source.

Although no one in the government reacted to Sen’s comments, the saffron ecosystem went after him on social media with abusive trolls.

The Nobel laureate also accused the Centre of treating its own people “in such a nasty way” before commenting that the Modi government’s treatment of Muslims, and the fact that it had no Muslim MP in either House of the Parliament was “unacceptably barbaric”.

“Against this backdrop, the vice-chancellor’s attempt to level a charge of land grab(against Professor Sen) is nothing but an attempt to malign him.... And in doing so,our vice-chancellor, who has even been reprimanded by courts, is trying to cosy up to the decision-makers in Delhi,” said Somnath Sow, an SFI leader at Visva-Bharati.

Not just the students and teachers on the campus, political parties also condemned Chakrabarty’s attempts to target Sen on a “petty issue”.

“The varsity authority has large tracts of land under its possession and there are disputes over 77 acres.... In the case of most disputes, it has taken legal recourse. Then, why this letter to Sen?” asked Bengal minister Chandranath Sinha.

“There is little doubt that the letter is nothing but an attempt to humiliate him and score some brownie points with the BJP government,” he added.

The Birbhum district administration, a source said, began the process of gathering information about land records related to Pratichi.

“We do not want any embarrassment for someone like Professor Sen.... The state government will stand by him,” said a source.

In 2021, the varsity had written to the state government to measure the area of Pratichi.