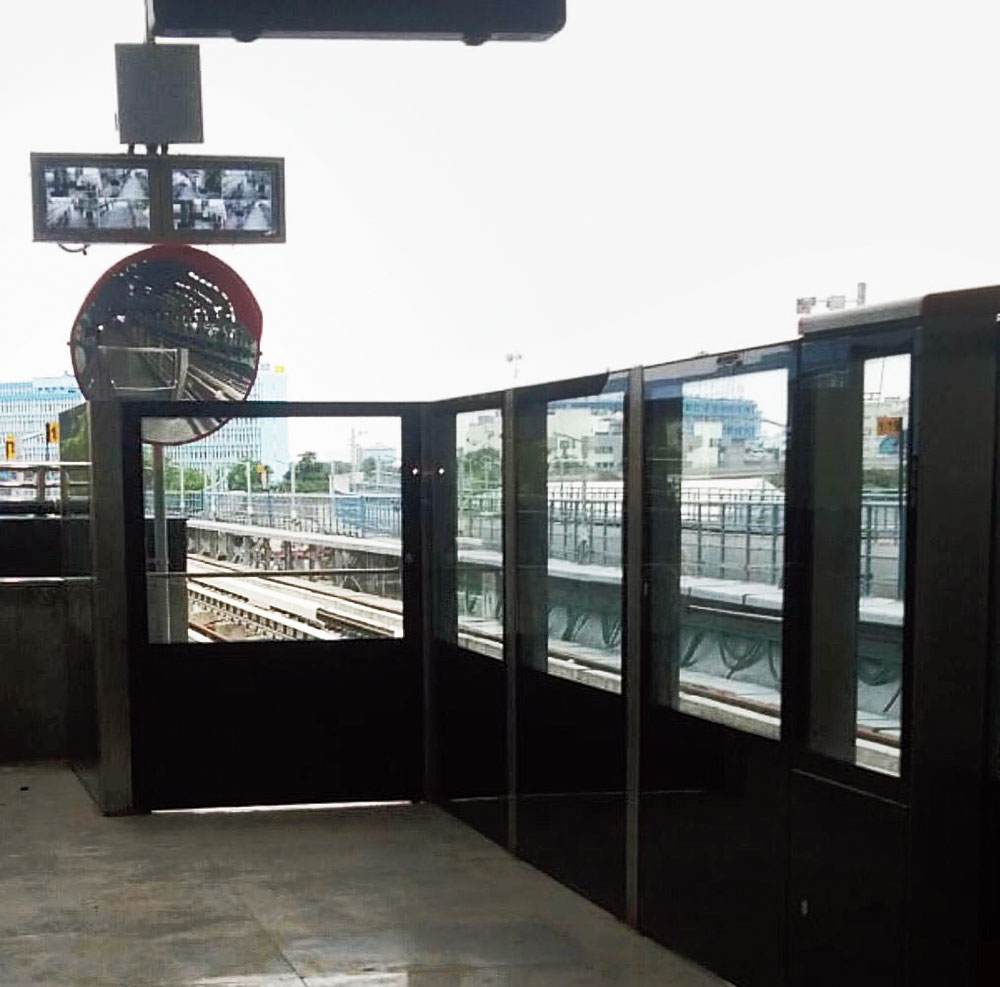 A convex mirror installed at Central Park station of East-West Metro to help the driver check the sliding doors. Above the mirror display screens have been installed for the driver see live feed from the CCTV cameras
(UB Photos)
Sanjay Mandal   |   Calcutta   |   Published 18.07.19, 08:22 PM

Metro Railway, which takes a lot of flak for failing to run its trains properly, is saddled with the additional responsibility of operating and maintaining East-West Metro, a modern technology-based utility waiting to be unveiled.

The railway ministry had in 2012 decided to divest the Kolkata Metro Rail Corporation (KMRC) of the responsibility of operating and maintaining East-West Metro and hand it over to Calcutta Metro.

KMRC, a railway undertaking, is the implementing agency of the East-West Metro corridor, which once fully functional will stretch 16.5km between Sector V and Howrah Maidan and run under the Hooghly river.

The first phase of the project — to stretch 5.5km, between Sector V and Salt Lake stadium — is likely to be unveiled in a month.

Professionals involved in mass transportation are questioning the prudence of the railway ministry’s decision on East-West Metro because Calcutta Metro is often accused of being unable to maintain its rakes and upgrade its technology.

“The people who are running the north-south line will be responsible for the East-West, too, though the latter is equipped with advanced technology. It is a bad decision and likely to affect the East-West operations,” an official said.

Metro mismanagement is back under spotlight following the gruesome death of 66-year-old Sajal Kumar Kanjilal, who was dragged into the tunnel after his hand got stuck between closing door flaps of an air-conditioned rake at Park Street station on Saturday evening.

The mismanagement, which allegedly affects almost all departments of Calcutta’s transport lifeline, is partly blamed on Metro being chained to the railways, unlike in other cities where the utilities are run by independent bodies.

Metro reported on Thursday that Calcutta Metro could not implement any major decision, including the one related to the upgrade of its safety features, without the approval of the railway ministry.

“There are two Metro operations under the railways in Calcutta at the moment — north-south and East-West. There cannot be two operators for the same transportation system under the railway ministry in one city. So, we have decided to amalgamate East-West Metro with the existing Metro. Calcutta Metro has the experience of running the oldest such system in the country,” a railway ministry official said on Thursday.

KMRC officials said they were in the process of handing over operations and maintenance to Metro Railway.

“About 100 people from Metro have been deployed at East-West stations and the maintenance yard. KMRC has not recruited anyone for operations,” an official of the agency said.

“The drivers were sent to Hyderabad for training. The agencies that have built rakes and other facilities are bound by a two-year defect liability contract. That means the snags that will be detected during the period will be repaired by the manufacturers. For regular maintenance, the Metro Railway personnel are being trained.”

Another official said the personnel from Metro Railway would have to undergo “extensive training to understand the modern system of East-West Metro”.

Calcutta is the only city where the Metro projects are run by the railways. In other cities, they are run by private operators or organisations set up jointly by the respective state governments and the Union urban development ministry.

Calcutta Metro, on the other hand, is owned by the railways and is one of the zonal railways under the ministry. All decisions regarding infrastructure, fare structure and revenue are decided by the Railway Board, which is often accused of red tapism.

“Metro operations require special skills and need to be handled by a professional agency. In Bangalore and Delhi, the respective corporations have separate project and operations teams,” said an official involved in one of the Metro projects.

This newspaper reported on Thursday that Calcutta Metro has a bloated workforce. According to urban transportation professionals, there should be 30 employees for every kilometre of tracks. Calcutta Metro, on the other hand, has around 150.

Despite an excess of personnel, maintenance is believed to be slack on many counts.