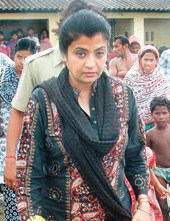 Star-MLA Debasree Roy was abused by a section of Trinamul supporters and forced to get off her car and walk down a muddy village road when she went to see the flood situation in her constituency Raidighi on Sunday.

The actress, clad in a kurti, black leggings, black dupatta and ankle-length black rubber shoes, maintained her composure in front of the irate villagers but later lashed out at her party workers.

“How can they talk to me like this? They are supposed to be our voters. How can someone say that I am not fit to be in politics? I am going to report this incident to Sovan Chatterjee (Trinamul’s in-charge of South 24-Parganas) once I return to the city,” Roy said before boarding a Toyota Qualis and rolling up its windows.

Accompanying Debasree on her relief camp tour were South 24-Parganas zilla parishad sabhadhipati Shamima Sheikh, BDO Chaitali Dutta and local Trinamul leaders. They visited the camps at Gilarchhat, Kumropara, Nandakumarpur and Dighirpar, out of the 11 gram panchayat areas affected by the flood.

The team moved in two-stroke autorickshaws along narrow brick roads and walked to reach the relief camps. Women and kids stood by the road to catch a glimpse of the Tollywood heroine. From the back seat of an auto, she smiled, waved and blew kisses at them.

“Please tell me if you are facing any problem at these relief camps. I have sent enough relief materials for you. Please don’t hesitate to ask for them,” said Debasree at a relief camp at Mahishgot in Gilarchhat.

Villagers complained they were not getting enough rice and baby food and needed fruits to break their Ramazan fast. The MLA immediately asked the BDO to replace the evening snack of chire-gur with cucumber and chickpea.

While she was about to leave the camp, Namita Das, a villager in her 70s, hugged her and tied a rakhi on her wrist.

The mood of the villagers changed after they realised that Debasree was only visiting the relief camps but not the villages, where hundreds of mud houses had collapsed and 3,800 acres of land had disappeared under water.

“You are not fit to be in politics and work for our party. If you are afraid of stepping into the mud and water, how will you solve our problems?” shouted a Trinamul activist, who was part of a group that insisted that Debasree visited a flood-affected area, 200m away from the relief camp at Purkayet Gheri in Kumropara.

The legislator quickly walked away from the group. She later asked a party member to find out about the man who had shouted at her.

Another unpleasant encounter awaited her on the way back from the Nagchok river embankment. There the villagers alleged that they had not received the compensation they had been promised after the Aila and blamed her for not fast-tracking the procedure. The BDO summoned the CPM gram panchayat and said he was responsible for the delay.

At the Nandakumarpur bus stand crossing, about 300 villagers blocked the path of Debasree’s car, demanding that she visit the adjacent flood-hit areas. They alleged the MLA had not visited the village since her poll victory.

The villagers wanted Debasree to visit the 2.5km road between Sabuj Bajar and Nandakumarpur, which was under waist-deep water. Seating in the car, she tried to calm down the villagers, but they started banging on its sides.

Debasree eventually got off the car, accompanied by two armed police guards and party workers, and walked about 50m along a muddy road, listening to villagers’ complaints.

She rubbished the allegations against her. “I visit Raidighi every Sunday and sit at my party office. I have asked the villagers to meet me there with their problems,” she said.

“I had planned to visit the interiors of the villages around this time but the areas got flooded. I understand the problems of the people and have sought time to improve the situation,” Debasree added.