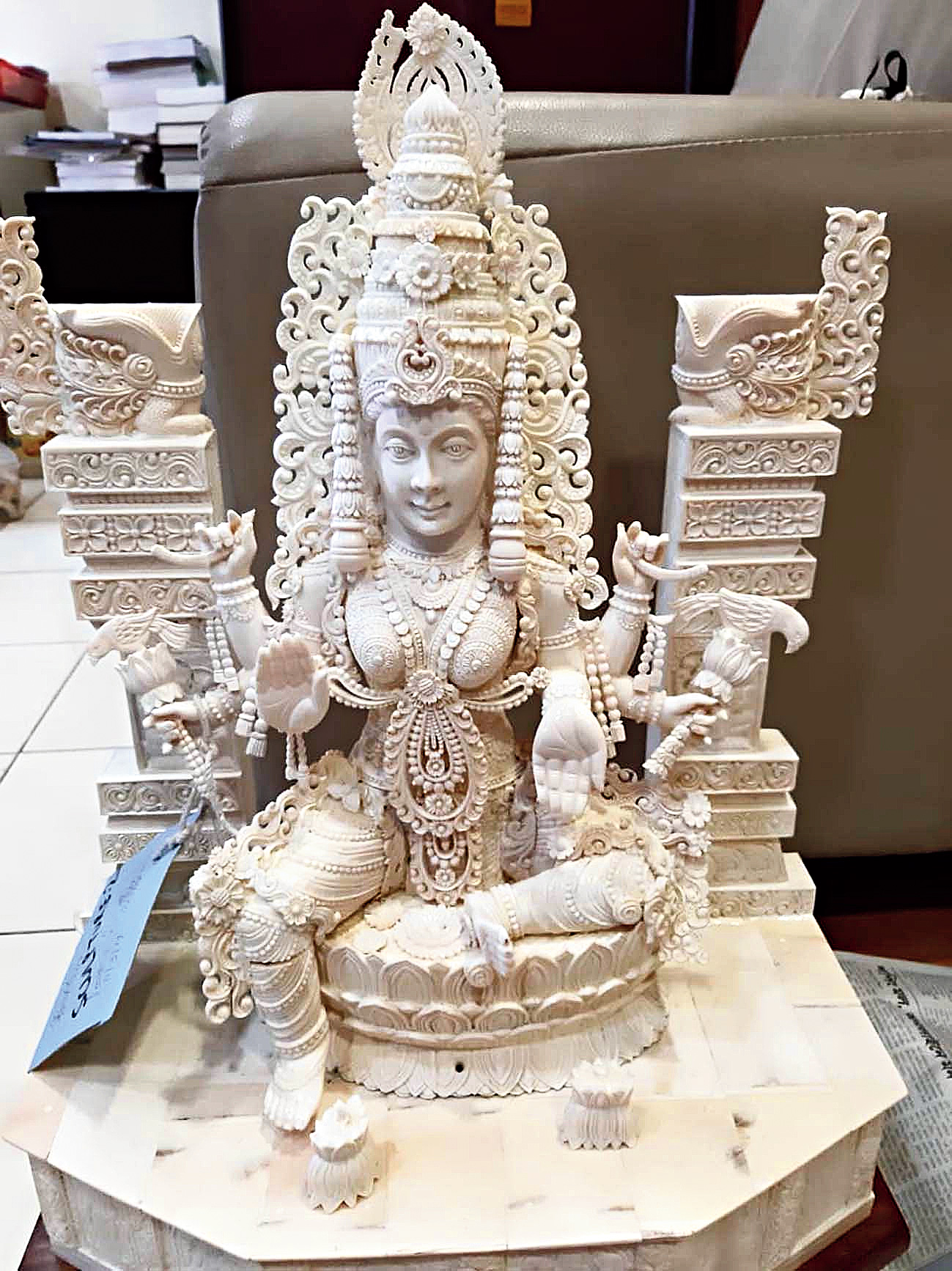 A woman and her father, who she had gone to pick up from Santragachhi station on his arrival from Kottayam, were arrested on the way to their home in Kasba on Monday and identified as ivory traders on the forest department’s radar for several years.

Two pieces of elephant tusk weighing around 3kg were found in the Volkswagen Vento in which the father and daughter were headed home. A raid on their Kasba apartment yielded several intricately carved ivory statuettes. The combined worth of the hauls would be several crores, sources in the forest department said.

Elephants are protected under Schedule 1 of the Wildlife Protection Act, 1972. Killing the animal or keeping any ivory item can invite at least three years in jail and a fine of Rs 50,000.

“Sudheesh Chandra Babu, 67, and his daughter Amitha SC Babu, 37, were in the Vento that was stopped at the intersection of Kona Expressway and Carry Road around 11.15am on Monday,” said an official of the Directorate of Revenue Intelligence (DRI), the intelligence wing of the customs department that made the arrests.

Sudheesh’s wife, wanted in a 2015 elephant poaching case in Kerala, and their son are absconding, the official said.

“She goes by the moniker Calcutta Thankachi (sister),” said an official of the Wildlife Crime Control Bureau, which is assisting the DRI in the case.

The family, originally from Thiruvananthapuram, shifted base to Calcutta after forest officials and police in Kerala launched a hunt for them.

Sudheesh and his family would procure elephant tusks from Kerala and hire artisans from Thiruvananthapuram to carve the ivory, the official said.

Another ivory statuette seized from the Kasba home of Sudheesh Chandra Babu and Amitha SC Babu on Tuesday.
Gautam Bose

Wildlife Crime Control Bureau sources said the family has been on the radar of forest sleuths for at least four years. The family’s involvement in poaching was revealed in 2015 after the confession of a former forest watcher who moonlighted as a guide for poachers led to the arrest of 50 persons and seizure of over 400kg of ivory.

“A team from Kerala came to Calcutta a couple of years ago to look for them but drew a blank,” an official said.

The tusks seized on Monday were en route to Nepal, a senior DRI official said. “Sudheesh and his daughter would have sold the tusks to a buyer in Calcutta who would then send them to Nepal via Siliguri,” the official said.

The father and daughter were produced in Bankshall court on Tuesday and remanded in judicial custody till March 19.

The DRI pegged the combined worth of the haul at over Rs 1 crore. But sources in the forest department said the actual worth of the haul would be at least a few crores. “A kilo of ivory sells for anything between Rs 20,000 and Rs 50,000” said the official.

The ivory statues seized from the Kasba apartment were intricately carved figurines of Hindu deities with decorated wooden bases. An ivory comb and a packet of ivory jewellery were also seized.

When Metro visited the apartment on Rajdanga Main Road, it was locked. Two men were sleeping in the garage. One of them identified himself as the family’s driver. The other said he was a craftsman from Thiruvananthapuram and made the wooden bases for the statues.

The driver said the family had rented the apartment three years ago but Sudheesh has been coming to Calcutta for at least a decade. Amitha stayed in the city while the other family members would come and go, he said.

Neighbours said the family kept to themselves and rarely interacted with anyone in the locality.