Cyclone Yaas: Evacuation set to start, CM to be at control cell 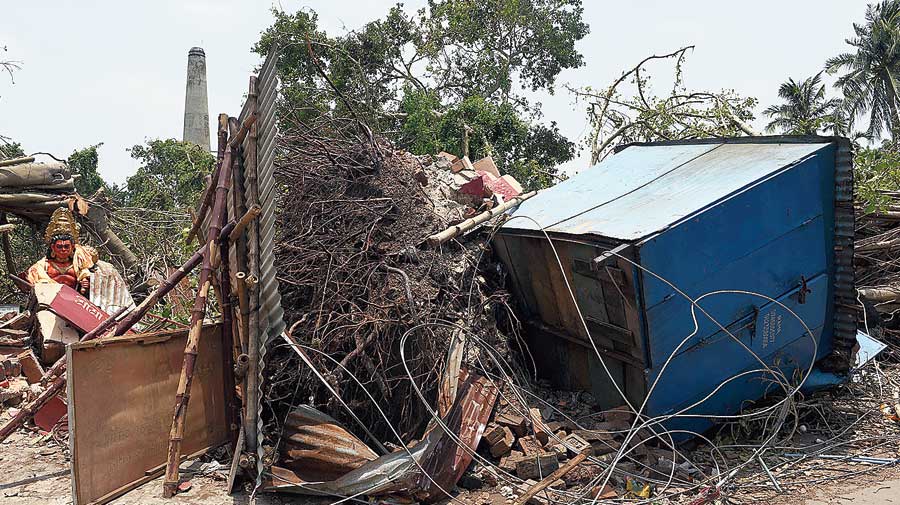 The damage after Cyclone Amphan at Chandernagore in Hooghly district.
File picture
Our Special Correspondent   |   Calcutta   |   Published 23.05.21, 02:20 AM

The Mamata Banerjee government has nearly completed the planning to evacuate people in vulnerable areas, particularly coastal belts of East Midnapore, as the Met office has warned the state that cyclone Yaas is likely to make landfall in Bengal’s coast on May 26 afternoon.

The evacuation in East Midnapore, sources said, would start from Sunday, while the process for the two other coastal districts, North and South 24 Parganas, would be finalised by Saturday night.

A control room would start functioning in Nabanna round the clock from Sunday to keep a track of the cyclone.

Chief minister Mamata Banerjee would personally monitor the situation from the control room on May 25 and May 26 (Tuesday and Wednesday). She did the same during Amphan last year in May, said a source.

“The Met office has issued a warning saying the cyclone, in all likelihood, is set to make landfall in Bengal. As the warning said Yaas could land in the coastal areas of Bengal and Odisha, the priority is to evacuate people from  the vulnerable areas of East Midnapore first as it is the district where the cyclone is likely to make landfall,” said a senior official.

The district authorities of East Midnapore have started campaigning in the district’s coastal areas to make people aware of the upcoming Yaas.

Already two companies of the National Disaster Response Force (NDRF) have been pressed into service in the district. More disaster management experts would be sent to East Midnapore, said sources.“We have also completed the plan to evacuate people from low-lying areas of the district. Flood shelters and cyclone shelters have been kept ready. Some other buildings have also been identified for people to shift to, if the need arises” said a source.

Coastal districts North and South 24-Parganas have also been asked to be prepared to evacuate people. Though Yaas is unlikely to make a landfall in these districts, “weather is always unpredictable” said an official.