CESC: Power restored to 90% of consumers 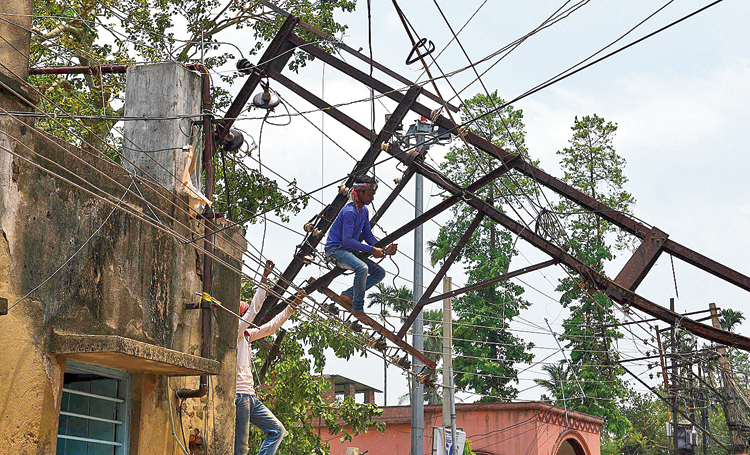 CESC on Sunday started sharing details of its post-Amphan power restoration activities — being undertaken on a “war-footing” — and reported completion of restoration of power to 92 per cent of its 3.3 million consumers.

The firm said the remaining work would be completed by Tuesday night.

The private power utility enjoys a virtual monopoly over the 567sqkm area that includes Calcutta, Howrah, and parts of Hooghly, North 24-Parganas and South 24-Parganas districts. CESC has been under tremendous pressure, including from the chief minister, for the first time in recent memory since Cyclone Amphan ripped through its territory.

Not only has the generation and distribution utility been unable to restore power in some parts even after four days passed, but it also came under fire from numerous affected consumers for its virtual silence till Mamata Banerjee lambasted the delay and dropped by at the company’s Victoria House headquarters in Calcutta on Saturday evening.

“Supply restoration work is on, on a war-footing. Restoration is complete in many places. But at many places, it remains to be done, where our teams are working. There are a few places where we could not begin work yet, but are trying out best to do so as soon as possible,” said Avijit Ghosh, CESC vice-president (distribution services).

The utility deployed 20 more teams on Sunday, in addition to 100 that have been working round the clock on restoration. Each team comprises around seven-eight personnel. Acute dearth of skilled manpower because of the pandemic-induced lockdown — unprecedented in the utility’s 121-year-old history — was, according to the chief minister, one of the major factors behind the delay in the CESC response in some places.

According to a government assessment, the CESC needed around 250 teams to seamlessly respond to the complaints reaching it, but had only 70 teams on hand, initially.

“We have put 60 generators to use at pumping stations, in several localities. We are also trying to do the same for some housing complexes where restoration has not been possible yet,” said Ghosh, adding that restoration to 92 per cent of consumers was complete.

On Sunday, not leaving it to the utility to offer information and clarity to the people, the state home department – of which Mamata Banerjee is in charge – issued a slew of updates on Twitter.

The home department said most water and drainage pumping stations were energised and the government has been “earnestly” trying to restore power and essential services in the rest of the areas.

“CESC & WBSEDCL have been given firm directions, teams working 24×7, fallen trees being removed by civic & state bodies with help from army & NDRF, all GoWB agencies deployed,” it tweeted.