Advertisement
Home / West-bengal / Culture connect on a platter in Calcutta

Culture connect on a platter in Calcutta 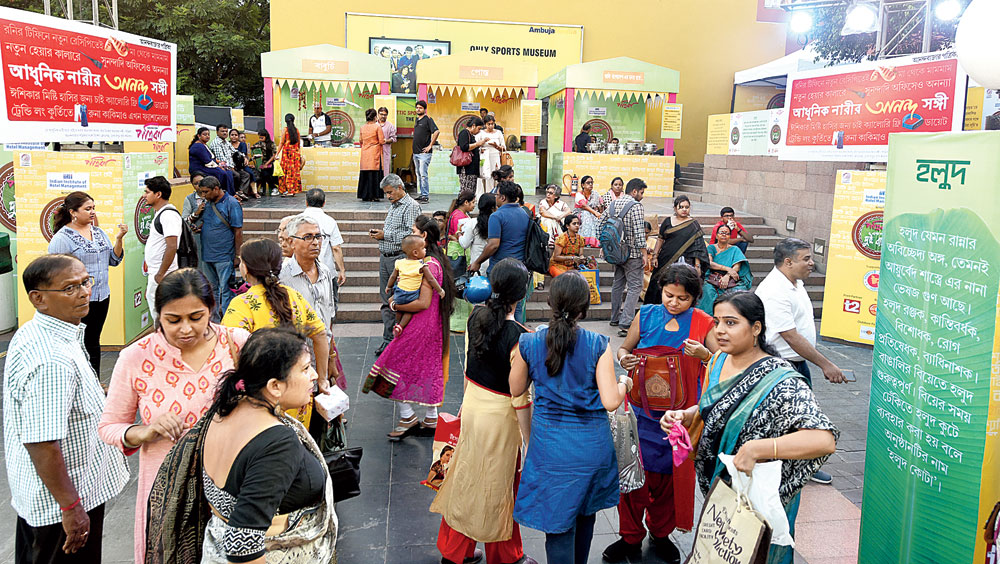 An amateur cooking teacher shared a family recipe from her grandmother’s vast repertoire, while a resident of north Calcutta whipped up a traditional delicacy from across the border.

Participants shared their own recipes and those from Bengal’s culinary heritage at a cooking competition held at the first edition of the Indian Institute of Hotel Management’s “Patrika ek, patey dui Bangla” partnered by t2 at Salt Lake’s City Centre on Friday.

The food festival will serve cuisines from Bengal and Bangladesh from 2 pm to 9 pm till Sunday in the Kund area. Bally resident Rima Majumdar attended the cooking competition and shared her thammi’s (grandmother’s) recipe of “daab mourola” with the crowd. “I learnt about the competition from Facebook and wanted to try out my grandmother’s recipe,” she said.

There was more than just the competition for the audience who had the option of choosing from 14 stalls serving food and beverages.

Food lovers will be able to taste dishes from “Aaji Bangladesher hridoy hote”, a stall set up by the Bangladesh deputy high commission in Calcutta. It is serving popular dishes from Bangladesh such as kachchi biriyani and bhaja ilish.

A group of college friends had a chance trip to the festival. “We came here to meet friends but stopped by when we saw a food festival with cuisines from our state and the neighbouring country,” said Shreyosi Roy, a Jadavpur University student.

Dum Dum resident Simarani Ray Chowdhury picked up a chicken kabiraji for her 10-year-old daughter. “This initiative of building a common platform through food is commendable,” she said.

The celebration of the cuisines and cultures had its fruit moment when an IIHM team, headed by teacher Subhankar Mandal, demonstrated the preparation of a mango-based mocktail called “dui Bangla”.