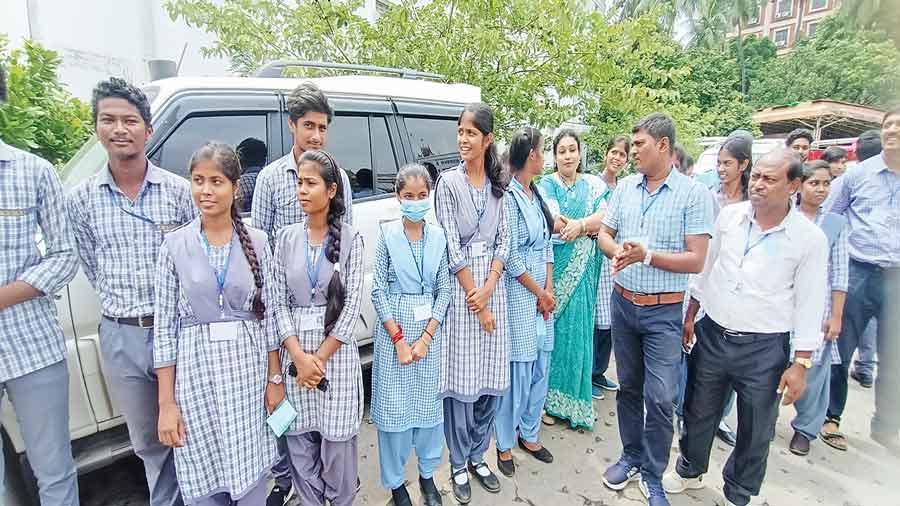 Students and teachers of Padmapukur Madhya Vidyalay, Baruipur, on a field trip to the Bengal Assembly in Calcutta on Thursday.
Arkamoy Datta Majumdar   |   Calcutta   |   Published 16.09.22, 02:16 AM

A study trip by a group of school students to the Assembly on Thursday turned out to be an experience that the young minds feel they should forget and unlearn fast.

Around 20 students of Classes XI-XII of Padmapukur Madhya Vidyalay, situated at Baruipur in South 24-Parganas —the Assembly constituency of Speaker Biman Banerjee — reached the House to watch the MLAs in action and learn how the legislature functioned.

In their school uniforms, the group of boys and girls entered the Assembly a little after noon, with teachers in tow. The students, however, were in for a rude shock as they saw members of treasury benches and the Opposition flashing posters and shouting slogans to attack each other.

Seated in the gallery upstairs and seeing the combative parties, the youngsters wondered whether what they had been taught in political science classes so far on how a House functioned was right or not. It has been a long tradition to bring students to the Assembly as visitors during sessions.

The aim is to make them learn about legislative proceedings and how members of the ruling party and the Opposition debate in the House. But Thursday’s trading of charges by the political parties in intemperate language left students disillusioned.

“We didn't expect our students to witness this. If things were not so unruly, they would have returned home with an experience to remember,” said Dibakar Sardar an assistant teacher of the school.

Sardar, who was one of the teachers escorting the youngsters, added: “Political science is one of their (the students) subjects and that is why we had organised this field trip. But after today (Thursday), I’m not sure what they learnt.”

“I had come with the idea that we will hear discussions on issues pertaining to the common people,” Naskar said.“We participate in mock Parliaments in school and we do shout slogans at each other during those sessions as well. But never have we done anything remotely close to what we witnessed today (Thursday). Such aggression is not expected from our lawmakers,” the student added.

While Trinamul used placards to attack Adhikari, BJP MLAs flashed posters accusing Trinamul leaders of being corrupt and thieves.Adding to the disappointment of  students, the chaos peaked in the House and both the parties walked out and staged simultaneous protest on the Assembly premises. The students saw those as well.

Subhamoy Maitra, a professor at the Indian Statistical Institute, said that the teachers who decided to bring the students to the Bengal Assembly should have been more careful.“Don’t they know the brand of politics that is displayed by the BJP and Trinamul? They (the teachers) should have restrained themselves from bringing their students to the Assembly,” he said.

Maitra added that the politics in democracy was a structure that stood on the foundation of social ethos. Neither the BJP nor Trinamul, Maitra said, displayed civic sensibilities or social decency in the House on Thursday. Mousumi Karmakar, another teacher who was part of the group, however, found the experience “nice”.

“It is true that the aggression of the parties could have been toned down, but the experience was nice,” Karmakar said.