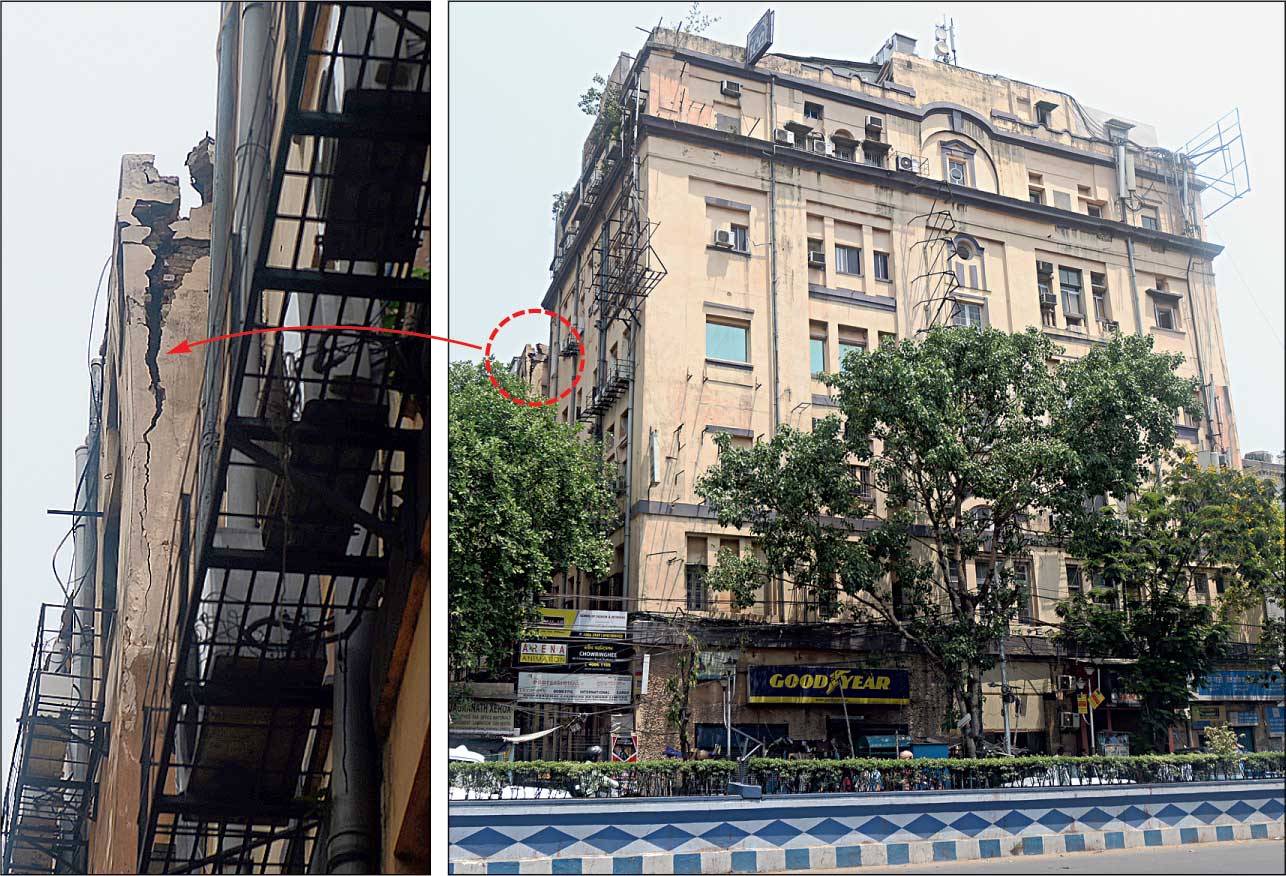 Deep cracks have emerged in the walls of the four-storey building at 60A Chowringhee Road and engineers said it could take several days to figure out the extent of damage Friday’s four-hour-long fire had caused to the structure.

Engineers of Calcutta Municipal Corporation (CMC), as well as forensic experts, said the impact of a collapsed roof on the fourth floor could have also weakened the third floor ceiling and it needed thorough investigation.

A forensic team visited the fire-ravaged portion of the building on Saturday. An official of the team said that they had spotted cracks on the floor of the fourth floor, which is also the third-floor ceiling.

“We have found cracks in a part of the fourth floor. Since the roof collapsed on the floor, it had increased the load on the floor by almost twice. It has to be checked if the impact of the collapse and the added load caused any damage to the floor,” said the official.

A long and deep crack was also seen in the wall near the fourth floor of the affected portion. An engineer said they would have to investigate if the crack had developed because of the heat. “Such deep and long cracks suggest that the structure faced problems,” said one engineer.

Any damage to this floor would mean that the third floor of the building is also unsafe, said the official.

Being a lime and mortar structure, the building became more vulnerable to the heat generated because of the fire. A forensic official said lime and mortar buildings were unable to conduct heat like reinforced concrete structures.

Friday’s fire was spotted at around 9am and the roof collapsed around an hour later.

Twelve fire engines took around four hours to douse the blaze. The building is located at the crossing of Asutosh Mukherjee Road and Bishop Lefroy Road. The seat of the fire — Glamour School of Fashion — has been gutted. The flames, however, did not spread to the other floors.

An official of the real estate company that manages the property said overhead water tanks had burst because of the fire and might have had helped prevent the flames from spreading. Each of the three tanks had a capacity of 12,000-litre.

An inspection by civic engineers on Saturday showed that some of the iron beams had twisted and deformed under the heat. The deformed beams is one of the reasons for the collapse, the engineer said.

However, debris of the collapsed portion and residual heat prevented the corporation’s engineers from carrying out dismantling work on Saturday. A civic body engineer said that clearing the debris and pulling down the dangerously hanging portions had to be done very carefully.

“A portion of the collapsed roof had fallen in a slanted manner. It is not possible to remove the collapsed slab without breaking it into smaller portions. This has to be dismantled very carefully else other portions might collapse on the workers,” said a CMC engineer.

“It would take five-six days to remove the debris and dismantle the precariously hanging portions,” he said.

Once the debris is cleaned, civic engineers would visit the site and see if it is stable. Normal functioning can resume only after the building’s structural health gets an NOC, said a tenant.

The building that houses two educational institutes, a few offices and two residential apartments, came up in the early years of the last century.

Throughout Saturday, employees of the various offices in the building took out documents, laptops and computers so that they can shift to another place till normal functioning is restored in the building.

“I was able to take out my cheque books, one computer and a few documents. It is very difficult to run from another place because most documents are still in the office. It is month end, targets have to be met and returns filed,” said Bajoria, who runs a dealership business for various automobile companies.