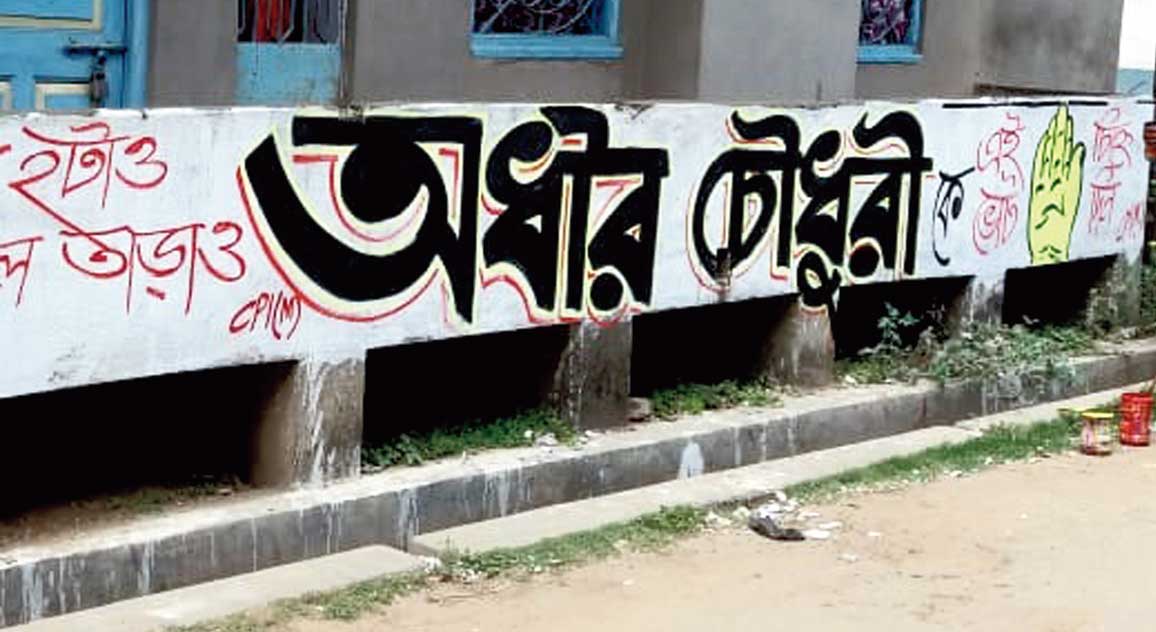 The CPM has started campaigning for Congress candidate Adhir Chowdhury in the Behrampore Lok Sabha constituency — where the RSP “unilaterally” fielded its own nominee — to honour the Left Front’s commitment to back the Congress in two seats.

CPM workers have already started writing wall graffiti in Kandi and Beldanga in favour of Chowdhury.

The RSP’s former five-term MLA from Bharatpur, Id Mohammad, filed his nomination on Friday to contest from Behrampore without approval from the Left Front. The Front’s decision was not to field candidates in Behrampore and Malda South which are held by the Congress as a mark of “goodwill gesture”.

Asked whether the CPM’s state leadership had approved the wall writings in favour of Chowdhury, CPM central committee member Rabin Deb said: “There was a Left Front decision not to contest and support Congress candidates in Behrampore and Malda South. Accordingly, local CPM workers might have undertaken campaigns in favour of the Congress candidate.”

Sources at Alimuddin Street said the CPM had asked the RSP to deny Id Mohammad the party symbol to respect the “unanimous decision” of the Left Front.

Trying to justify the decision to field a candidate, veteran RSP leader Kshiti Goswami, said: “Why should the RSP alone make the sacrifice? The Congress had also won Jangipur seat in 2014, but the CPM has decided to contest there. Our comrades, specially the younger generation, are not ready to surrender Behrampore to the Congress.”

The Congress and the Left Front had decided to contest general election together in Bengal. But both the organisations couldn’t reach an understanding on seats.

Hopeful about getting a handsome support, Id Mohammad said: “My state leadership will speak on my candidature issue. But all I can say is that majority of the Left minded people will vote me despite the CPM’s campaigning for the Congress candidate.”

Congress candidate Chowdhury welcomed the move. “I am not depending on their support base. Why should I oppose any one who is campaigning for me?”

“However, I am yet to decide on a joint campaigning with the CPM,” Chowdhury added.