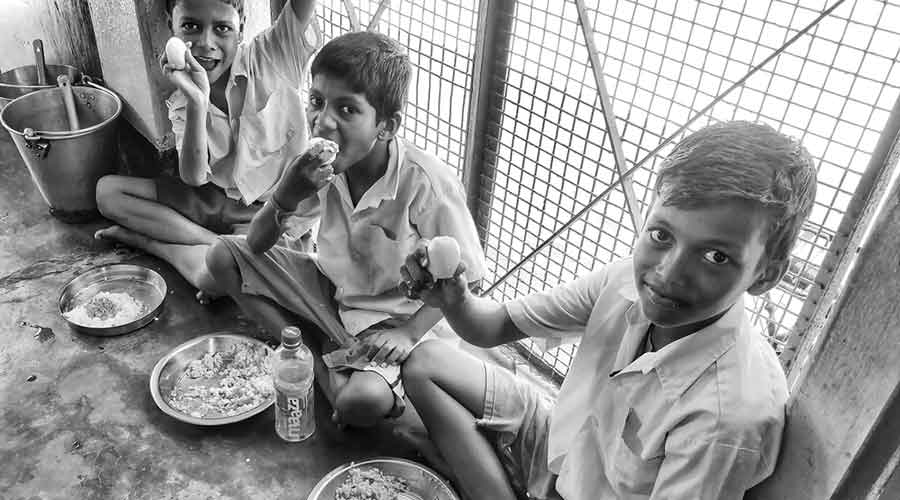 Teachers’ associations said this week that for the past month, they had been meeting an “over Rs 10,000 price gap” on an average per school in the case of potato through donations and from their pockets.
Representational image from Shutterstock
Anshuman Phadikar   |   Midnapore   |   Published 09.11.20, 05:13 AM

The rising price of potatoes has created a funds poser for midday meals — rationed to students as schools are closed amid the pandemic — in West Midnapore.

The district chapter of the State Forum of Headmasters and Headmistresses has submitted a deputation with the district magistrate demanding enough funds to procure potatoes for midday meals for roughly 6.27 lakh students.

The deputation was given on Thursday last week following weeks of uncertainty over how schools would meet the price gap between Rs 45 per kg of potatoes sold in markets and Rs 32 for a kg that the state education department had allotted. On Friday, a day after the deputation, the district magistrate allotted Rs 35 per kg, but headmasters and teachers called it “insufficient”.

“Ever since the lockdown we are providing monthly supplies to students as opposed to daily meals. This entails additional costs, including public announcement systems (informing people about the distribution of ration) and PPE (for those delivering the ration), which the government is not paying for,” said district president of the association Amitesh Chowdhury.
He added that monthly midday meal parcels include a ration of 1kg potato, 1kg chhola (chickpea), 2kg rice and a bar of soap. “While chickpea and rice are provided by the state, schools have to buy the other two items,” he said.

Teachers’ associations said this week that for the past month, they had been meeting an “over Rs 10,000 price gap” on an average per school in the case of potato through donations and from their pockets.

“We supply midday meals to around 1,000 of 1,800 students in our school. While buying potatoes in the market we have been often undersold or given bad stock for our inability to pay bulk rates,” said Bhupal Prasad Chakraborty, headmaster of Ishwarchandra Majhi Memorial School in West Midnapore’s Khukurdaha.

District magistrate Rashmi Kamal on Saturday acknowledged the rise in potato prices but said officials were unable to increase the allowance beyond Rs 35 per kg “owing to state-enforced limitations on spending”.

“We have raised the allotment to Rs 35 per kg from Rs 32 per kg in the light of this (Thursday’s) deputation but can’t go beyond that,” she said.

Potato traders in Bengal have blamed the recent central amendment to the Essential Commodities Act for the rise in potato prices in retail markets as it allows barrier-free trade of the tuber. With the amendment, commodities like cereals, pulses, oilseeds, onion and potato have been removed from the list of essential commodities.