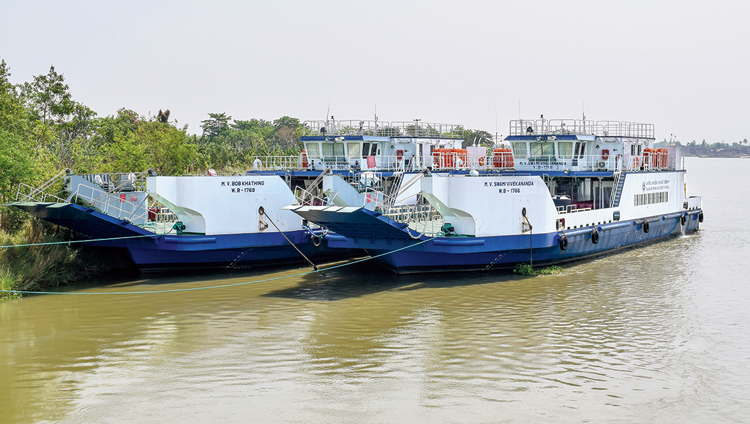 Residents have forced 36 crew members of four vessels to remain on board at the Guptipara ghat on the Hooghly without essential items for the past nine days, fearing they will spread the novel coronavirus in the area if allowed to land.

The four new vessels belong to the Inland Waterways Authority of India.

The crew members were hired by the IWAI to bring in the four crafts from the Cochin shipyard to Guptipara ghat. But no one from the IWAI had turned up to receive the vessel because of the nationwide lockdown.

The IWAI is an autonomous authority under the Union ministry of shipping, road transport and highways and has a terminal at Guptipara near Santipur in Nadia.

Sources said the four vessels were for ferry services in Bengal and the Northeast.

The crew had left Cochin on March 24, a day after lockdown had begun, and arrived in Guptipara via Calcutta port on April 2. The crew members were attached to Libra International Shipping Limited and hired by the IWAI.

The IWAI’s effort to supply them with essentials also failed as the residents of Sutragarh Char and adjacent villages stopped the process.

Security guard Ratan Saha had delivered the first consignment of essentials to the ships but when villagers came to know about it they threatened him.

Saha said: “I could supply them with only 20 bottles of 20 litres of water each, two sacks of rice, one sack of potato, edible oil, to survive for about a week. But local residents have threatened me with dire consequences if I supply food and other essentials to the crew.”

Police officers met the crew members two days ago and advised them to keep themselves confined to the ships. But the police could not help with the daily needs of the 36 crew members.

Captain of one of the ships N. Satyanarayan Prasad told The Telegraph: “The IWAI hired our service. We landed in Guptipara on April 2. We humbly sought permission to allow at least one person from each ship to step out to buy essentials like food and water from the local market in Santipur. But the police authorities did not allow us. While we are almost out of food and water.”

“Our stock of water has been finished and we are surviving on river water.”

He said all the 36 had been medically examined when they had reached Calcutta port. None of us has any suspected symptoms of Covid-19. We also have medical certificates issued by the doctor in Calcutta. We have shown it to the police and some local people, but everyone appears suspicious of us.”

A villager said: “We cannot allow the crew who are mostly from outside the state to visit the market. At the same time we cannot allow anyone from among us to visit them. We have asked the administration for help.”

An IWAI officer said: “The lockdown disturbed the initial plan of crew transfer. We are now hoping to do the job on April 14. We have requested the local administration to extend all possible support to them. We are hopeful their problem will be sorted out.”