Son-in-law frantically searches for help, but in vain 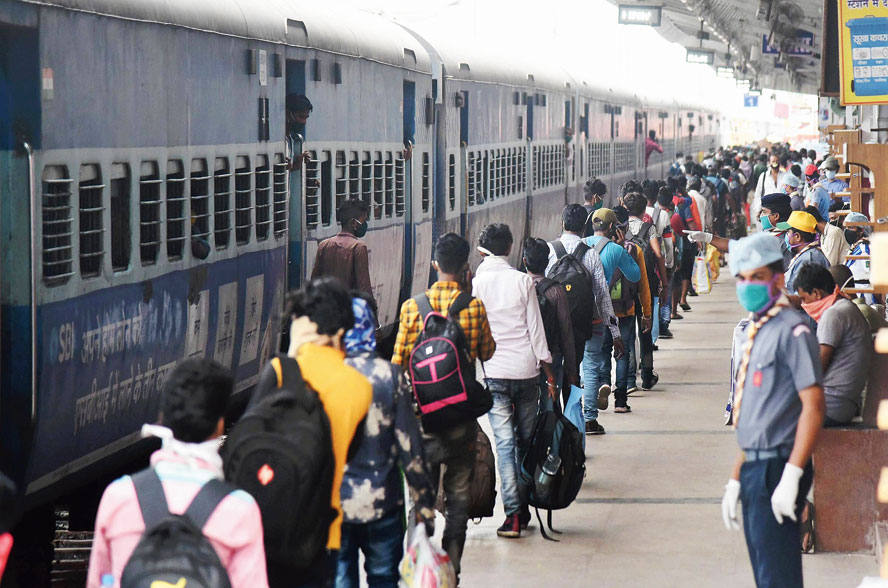 Ranjit Tamang had pulled the emergency chain of the Shramik Special train a couple of times, frantically looked for railway personnel and tried to search for the train’s location on the internet, but nothing worked and his mother-in-law Kipa Sherpa, 51, breathed her last on journey on Wednesday night.

“If we could have managed oxygen for her, I think she would have survived,” Tamang, a Kalimpong resident, told The Telegraph over the phone from Lucknow.

So far, nine persons have reportedly died on Shramik trains since Monday.

Kipa, her two daughters, their husbands and her grandson had boarded the NJP-bound Shramik Special train in New Delhi on Wednesday evening.

Tamang said they were all pleased when they had received a call on Tuesday night confirming their travel on a Shramik train. “We woke up early and did not even have proper food — we had bananas and mangoes on the way. We started for the designated place for health check-up at 7 am,” said Tamang who used to stay at Kotla, New Delhi. He was forced to return home because of job loss and the subsequent economic hardship.

Later in the day, the family was taken to the railway station in a bus. “The day was very hot. My mother-in-law was fine...maybe, she just had a headache because of the heat,” said Tamang.

The train started from Delhi around 6pm and so did their problem. Shramik trains have non-AC coaches. “My mother-in-law started complaining of uneasiness but once she started getting serious, we, too, became nervous,” said Tamang.

It was then that Tamang pulled the emergency chain a couple of times. “The train wouldn’t just stop,” he said.

He moved across compartments hoping to find some railway personnel, but in vain. “I had stored the number of the person who had called me up to confirm my journey. I called him up and he provided me with two helpline numbers,” said Tamang.

Voice connectivity was an issue. “The helpline number wanted to know our location. We had no clue as it was pitch dark outside. I also received a call from the railway ministry. I tried to search for our location through the internet but that, too, would not work,” the migrant said.

The official who had called to confirm their journey and the helpline number could finally trace their location.

“The railway officials were waiting for us at Etawah (Uttar Pradesh). We reached the station around 10.30pm but my mother-in-law had passed away around 9pm without any help,” said Tamang.

According to the son-in-law, Sherpa did not have major health problems. “However, when she was in Kalimpong, she used to take medicines for high blood pressure but that was never an issue.”

“Is it too much to ask for a medical team on every Shramik Special train, given the condition in which people are travelling?” asked a resident of Kalimpong, adding that more empathy was needed as harried people were travelling under extraordinary times.

According to him, the ordeal the five-member Kalimpong family had to go through provides an insight of hardships low-income travellers have to face during this forced mass movement.

Post-mortem was conducted at Etawah and the family was returning by road on Thursday. “Police have given us food and water. I received a call from district officials there (in Kalimpong) saying the ambulance fare would be borne by them,” said Tamang.

He had also been assured of transportation from Siliguri to Dalapchand in Kalimpong by the GTA.