Advertisement
Home / West-bengal / From Kerala to Kalna, an ‘epic’ ride

From Kerala to Kalna, an ‘epic’ ride

Journey of 2,300km on a 100cc motorcycle to reach home for wife’s child delivery 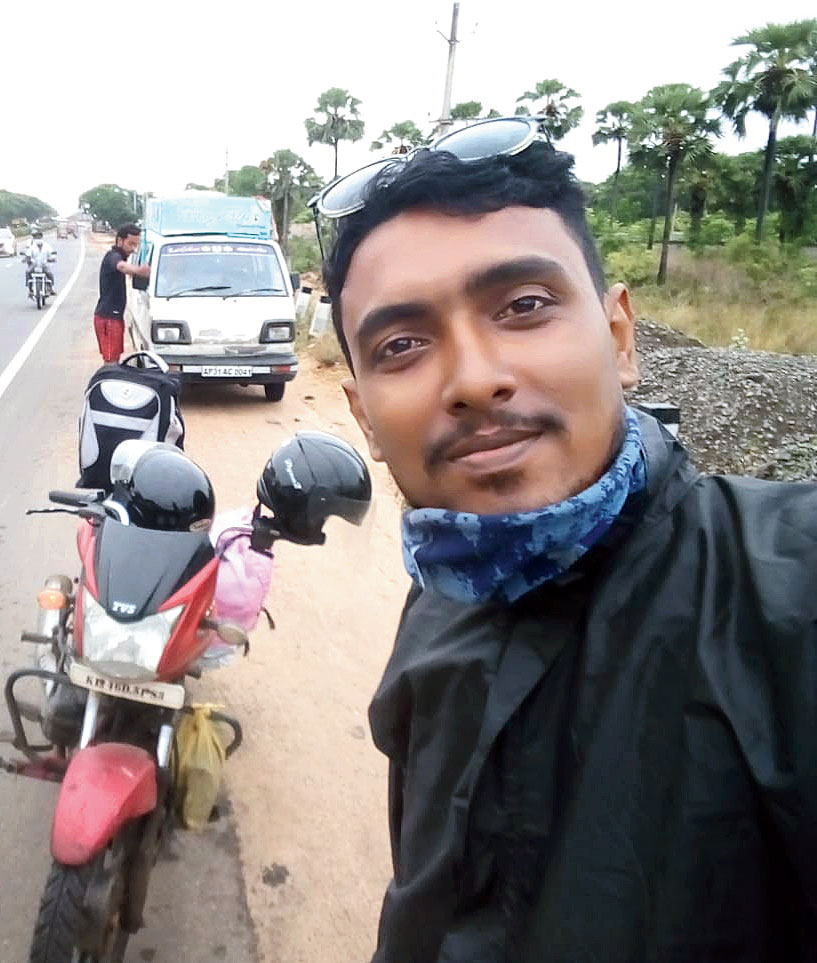 Even before the nationwide Covid-induced lockdown in March, migrant worker Arka Mondal, 27, was ready to leave Kerala for Kalna in East Burdwan at a moment’s notice.

Arka, employed as a welder for the last five years in Kerala’s Malappuram, had been told “in jest” by his pregnant wife Swati, 22, due to deliver their first child in July, that he would have to jump on the next train home if the need arose.

Never did Arka suspect that when the need did arise, he would have to take a five-day “cinematic epic journey” of 2,300km on a 100cc motorcycle to reach home.

Speaking to The Telegraph from the local high school quarantine at Keshobpur village under Kalna police station limits on Sunday morning, Arka said he reached Keshobpur on Saturday around 6pm. Why this journey? “It was becoming impossible to get a seat on a migrant special train despite registering with the local police,” Arka said.

“I was worried whether I would make it for my wife’s delivery. Finally, I threw caution to the wind and set out on my bike early on June 2 with my cousin Bikashda, who also worked at the same unit as me,” he said, clearly still in knots from the discomfort of the journey.

Bikash, 39, does not ride, Arka said, but “dada’s support from the pillion was crucial.”

“We slept under tollway bridges and along highways. We used open fields for ablutions and ate whatever we could when we found a eatery or dhaba open on the highway. It was harrowing. Luckily, petrol pumps were open,” Bikash said.

Amid rising Covid-19 cases across the country, the plight of migrant workers has taken centre stage as many are asking why Prime Minister Narendra Modi announced a nationwide lockdown on the evening of March 24 with only a four-hour notice leaving the country’s most vulnerable sections to face the fallout.

Migrant journeys are making headlines globally with the crisis widely described as the biggest in post-Partition India. Many migrants, walking or cramming themselves on the flatbeds of trucks, lost their lives in mishaps.

Bengal chief minister Mamata Banerjee has been openly critical of the BJP government at the Centre, for first “mishandling” the lockdown to turn the situation of the migrant workers into a humanitarian crisis and then for “trying to shift blame” on Opposition-ruled states.

Arka said he had never been a long-distance biker. “I bought the bike only last year in Kerala, so I could take my wife Swati on a spin sometimes when I came home on my visits,” he said. “When this crisis came, I appreciated the value of my purchase,” he said.

Arka and Bikash will complete their institutional quarantine on June 20.

Swati, speaking from her father’s home Hooghly’s Dhaniakhali, said she was “terrified when my husband said that he would bike his way home all the way from Kerala”.

“Right now, I am so relieved,” she added.