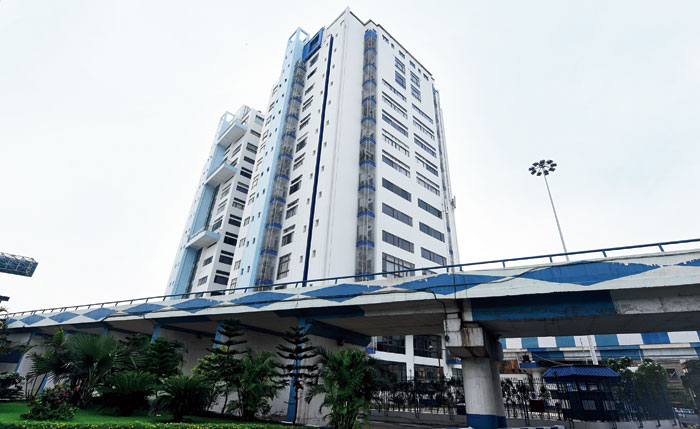 The flyover below which the Howrah police commissioner’s office is proposed
Picture by Pradip Sanyal
Pranesh Sarkar   |   Calcutta   |   Published 09.10.19, 07:55 PM

A proposal has been mooted to set up an office of the Howrah police commissioner under one of the ramps of Vidyasagar Setu adjacent to Nabanna at a time the state government is campaigning against construction under bridges, citing difficulty in carrying out inspections.

“The proposal has been put forward by the office of the Howrah police commissioner through a letter… It appears the proposal was sent after securing approval from the top brass of the government. If the office comes up, it would set a wrong example as the government is carrying out a campaign against any kind of structures under bridges after the Majerhat bridge collapse last year,” said a senior state official.

The commissioner’s office said he was not available when this newspaper tried to get a response.

According to the proposal, the office of the Howrah police commissioner would be set up in the space between three out of five pillars under the ramp that leads to Kazipara of Vidyasagar Setu, near the VIP exit gate of Nabanna.

The proposal mentions that the Howrah police chief regularly visits Nabanna on official purposes and as there is no office for the officer, the new office has been envisaged.

Sources in the PWD said the process of setting up the Howrah police commissioner’s office at the site was initiated as the top brass of the government had no objections.

A section of the PWD officials, however, questioned the plan and wondered whether the state was setting the “wrong example” by allowing the police commissioner’s office under the ramp of an important bridge like Vidyasagar Setu.

Sources said the top brass of the government had repeatedly said no structures under bridges would be allowed after the Majerhat bridge collapsed last year.

“Bridges like the Sealdah flyovers had come under the scanner at that time as their health check-up could not be conducted because of structures underneath. If the PWD allows an office of the CP, Howrah, under one of the ramps of Vidyasagar Setu, the effort to remove structures under bridges would take a hit,” said an engineer.

There are already a few structures under the ramps of Vidyasagar Setu adjacent to Nabanna. Sources said the structures were set up before the Majerhat collapse to accommodate facilities for the police and strengthen security. But after the Majerhat cave-in, the government was trying to ensure that the health check-up of the bridge does not get affected because of the structures by ensuring that no false ceiling is put up.

“There are doubts whether the office of the Howrah commissioner of police would be set up without a false ceiling and whether engineers would get free access to conduct the heath check-ups of the ramp by entering the office of the senior officer,” said a bureaucrat.

Another senior official questioned the necessity of the office. “The Howrah commissioner has an office nearby. Many senior officers visit Nabanna everyday from their offices located in faraway places like Salt Lake. If they don’t face problems, it is not clear why the CP, Howrah, needs an office near Nabanna.” said the bureaucrat.