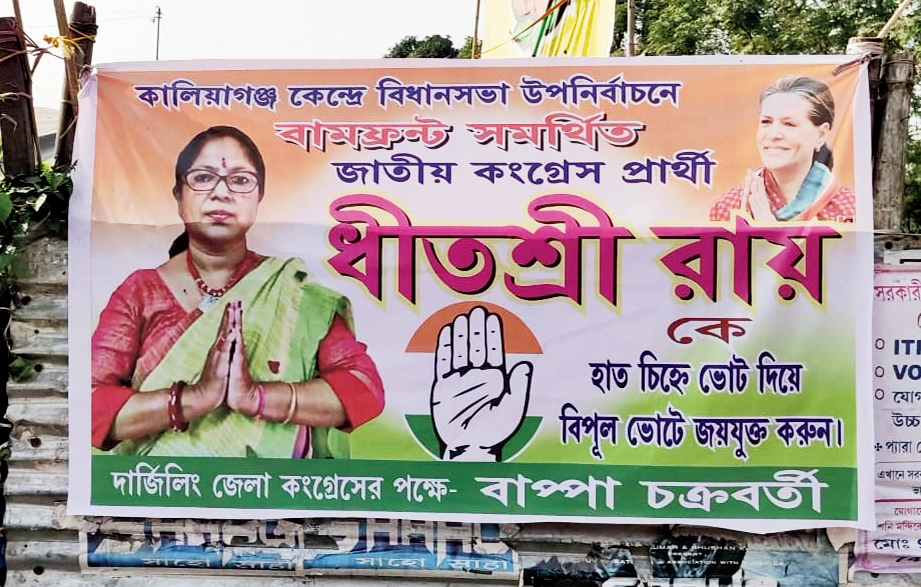 The Congress is for the first time in decades not relying on the legacy of Priya Ranjan Das Munshi, a son of the soil and one of the tallest leaders in the region, in an election in North Dinajpur.

The leader, fondly called Priyada, had been more popular in the district than even Sonia and Rahul Gandhi.

But during the Kaliyaganj Assembly bypoll, scheduled to be held on November 25, Das Munshi’s legacy is not the Congress’s focal point. Das Munshi, who traces his roots to Kaliyaganj and has represented district headquarters Raiganj in Parliament and also been a central minister, passed away in 2017 following prolonged illness.

The Kaliyaganj seat fell vacant after the death of Congress MLA Pramatha Nath Roy in July this year. Roy’s wife Dhitashri is the Congress-Left Front alliance candidate for the seat.

Such has been the dominance of the Congress in this north Bengal constituency that the party has lost the seat only twice since independence, both times to the Left.

Although Dhitashri said Das Munshi and the Congress were “inseparable”, the campaign materials tell a different story. There are no photographs of Das Munshi and his wife Deepa Das Munshi, who is also a former Raiganj MP, on the walls of Kaliyaganj.

Dhitashri, however, said: “There are some materials with Priyada’s picture. We have ordered for some more campaign material and his photographs will feature there.”

Till recently, parties used to try their best to cash in on the sympathy wave created by Das Munshi’s illness and death during elections in the region.

On the first death anniversary of Das Munshi, both the Congress and the Trinamul Congress had separately observed the day. During the Lok Sabha election earlier this year, Deepa came third, after the BJP and Left candidates. The BJP lead in the Kaliyaganj Assembly segment by nearly 57,000 votes.

While some leaders said the Congress was trying to build the party’s district unit afresh, some others said Deepa had not been able to match the legacy of her husband in recent years.

Trinamul minister Gulam Rabbani cited Deepa’s performance in the Lok Sabha election and said: “The results are a clear indication that elections cannot be won only by relying on legacy.”

Some district Congress leaders maintained that Das Munshi’s “good work is being slowly forgotten by the public”.