The rally, to protest the alleged rape and murder of a Dalit girl at Hathras, will start from Moulali and conclude at Dharmatala 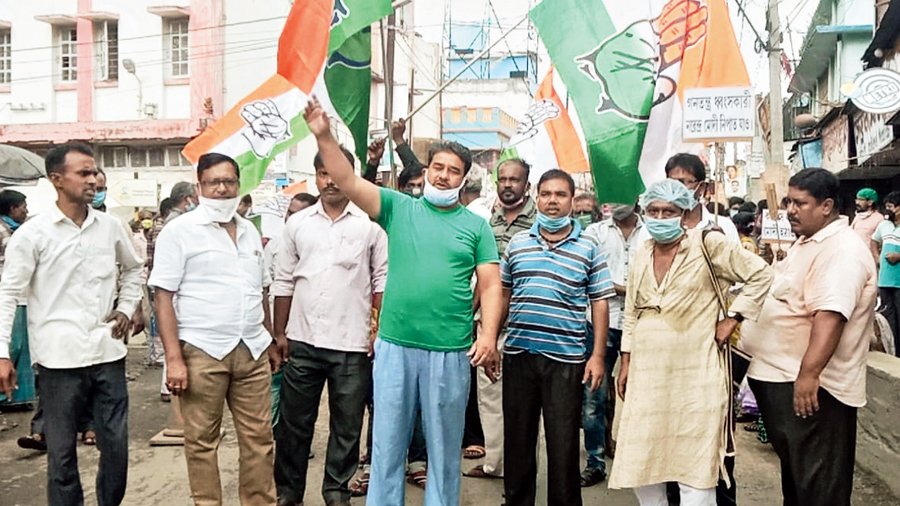 Congress workers block a road in Basirhat on Friday in protest against the Hathras incident
Pashupati Das
Our Bureau   |   Calcutta   |   Published 03.10.20, 01:45 AM

The Left parties and the Congress will jointly hit the streets on Saturday to protest the alleged rape and murder of a Dalit girl at Hathras in Uttar Pradesh and also use the rally to cement their ties as the two political forces intend to fight the next Assembly elections together.

The rally will start from Moulali and conclude at Dharmatala on Saturday evening.

“Members of student, youth and women wings of the Left parties and the Congress will hold a rally to protest the Hathras incident,” said CPM MLA Sujan Chakraborty and added that the protesters would also demand security for women in Bengal.

Several CPM and Congress leaders said the idea was to increase the number of common programmes to strengthen the ground for an alliance.

Last week, senior leaders of both the parties, including Left Front chairman Biman Bose and leader of the Opposition in the Assembly, Abdul Mannan, had walked together to protest against the contentious farm bills and allied legislations introduced by the Narendra Modi government last month.

“We are trying to project the alliance as the voice of the common man in the state. It is important to showcase that the Trinamul government is no different from the BJP when it comes to atrocities against women and we have to do it together,” a Congress leader said on condition of anonymity.

According to Chakraborty, the joint rally to protest the Hathras rape was more of a moral duty than a political ploy. “It is only natural for us to come together and speak together against atrocities whenever necessary,” he said.

Political movements in Bengal against the Hathras incident gained momentum on Friday after Congress had on Thursday declared nationwide protests following the heckling of Rahul Gandhi by UP police.

On Friday, Congress workers blocked the intersection of Taki Road and Itinda Road in North 24-Parganas’ Basirhat to protest against the Hathras rape and the heckling of Rahul. The blockade began at 9am and continued for about two hours creating a major traffic congestion on the two busy roads. Around 11am, police managed to persuade Congress activists to lift the blockade and clear traffic congestion on the route.

Congress leaders in Birbhum organised road blockades at Chitra more in Bolpur. Traffic was disrupted in the area for about an hour.

SFI, the CPM students’ wing, on Friday held at least 20 protests across East Burdwan to condemn the Yogi Adityanath government’s role in the Hathras incident. The Calcutta district committee of the SFI also organised a demonstration at Shyambazar in north Calcutta.

A group of students also agitated in front of Upasana Griha of Visva-Bharati condemned the ghastly incident.