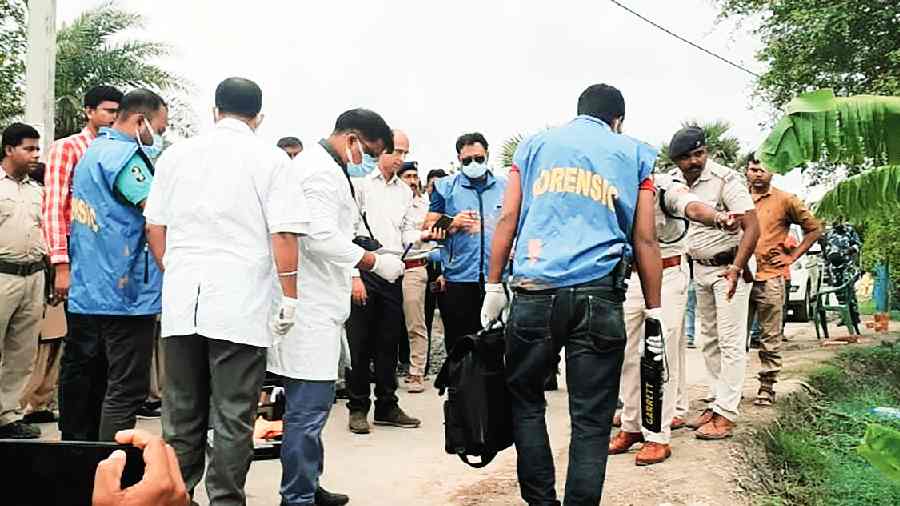 A brother of a Trinamul Congress panchayat member, who had been murdered along with two others at Canning in South 24-Parganas on Thursday, filed a police complaint on Friday naming six persons, including a party activist.

A six-member gang had killed Gopalpur gram panchayat member Swapan Ghosh and Trinamul’s booth committee chiefs Bhutnath Pramanik and Jhantu Halder near Kochua Pear Park. All the three were shot from close quarters and then their throats slit.

Pramanik and Halder tried to escape despite grievous injuries, but the criminals chased the duo and hacked them to death.

Police sources said all the accused persons were at large. The investigators detained six persons, including two women, for their suspected role in the murders.

The delay in nabbing the culprits sparked off anger among local residents and a major section of Trinamul workers. Senior police officers faced the anger when the bodies of the three arrived at the village for the last rites on Friday afternoon following autopsy.

The villagers, who are mostly Trinamul supporters, allegedly heckled some policemen who were deployed to manage the crowd.

The local people asked why Rafiqul Sardar had not been arrested even though he was an accused in a previous case of murder attempt on a Trinamul youth wing leader.

“It is clear to us that Rafiqul has the blessings of influential leaders, without which it is impossible for him to roam freely,” cried out a Trinamul supporter.

Canning West Trinamul MLA Pareshram Das: “It is unfortunate that some Trinamul activists heckled police today. But it was a natural outburst of anger. People are in no mood to accept the murders since they were well aware of the possible threat to our leaders.”

He ruled out that internal bickering in Trinamul was to blame for the triple murder.

An 11-member Trinamul delegation led by four party MPs will visit Canning police station on Saturday and seek clarifications for the delay in nabbing the accused persons.

An official of Canning police station said: “We have gathered information about the assailants and are trying to trace them. They fled the area on motorcycles and we are searching all possible hideouts to nab them.”

A forensic team visited the spot of the triple murder on Friday. Unexploded bombs were also seized from the spot.