Advertisement
Home / West-bengal / How climate change is impacting the Sunderbans

Climate change is playing havoc with more than just the ecology of the Sunderbans; it is scripting deceptive socio-economic changes 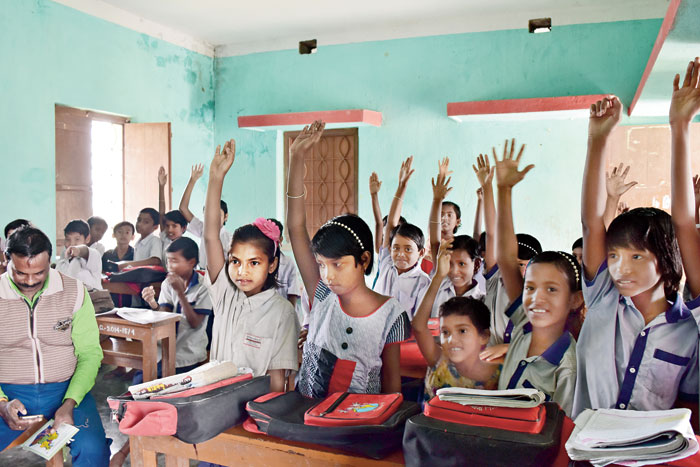 This is a story of how data can bring to you a significant trend and yet tempt you into erroneous conclusions. Boys are dropping out of schools in the Sunderbans in distinct numbers. Girls are staying the course. Does that mean this is good news for girls? No. Not necessarily, not always. The better news may still belong to the boys. They are getting on, escaping the Sunderbans’ narrowing opportunities; the girls remain stuck in their poorly schools, and the prospect of being given away in marriage.

The crumbling building of Rangabelia High School in Gosaba, east of the Indian Sunderbans, provides a picturesque backdrop to a tributary of the river Bidyadhari. This school is in South 24-Parganas, which bore the brunt of Cyclone Aila in 2009. The building was abandoned in 2012 because it was steadily sinking into the ground, as the river rose. It is still sinking. The school has now shifted to a new building not far away.

A sinking building is not something that inspires confidence in students. But Rangabelia High School, despite its circumstances and severe lack of teachers — 30 out of 54 posts are vacant — is regarded as one of the better schools in the Sunderbans. For the past few years, there has been a new trend, though: the boy students are dropping out, but not so much the girls. Last year’s enrolment figures show that in Class X, there were 81 boys, as compared to 123 in Class IX. For girls, the figures are 72 and 95, respectively. There are 108 and 90 boys in Class IX and Class XII, respectively, and 124 and 103 girls.

This pattern repeats itself across the Sunderbans. It has been so for quite some time; since Aila, claim school authorities. They say the cyclone devastated the Sunderbans and sharply increased the migration of men to the cities for work. The boys are leaving school like never before to join this workforce.

Even as the boys go missing, the girls are dropping out less and enrolling more, a lot due to an incentivised education by the Bengal government. This is also because when education, such as it is in the Sunderbans, does not provide employment, boys leave. But girls have no such choice. “We can’t keep the boys because they want mobile phones and are running away to earn money,” says Rathindranath Tarafdar, the teacher-in-charge of Rangabelia High School. In the Sunderbans, gender is acquiring a new calculus.

In Kumirmari, only a few kilometres further north, the Dakshin Kumirmari Mridhagheri Primary School has 40 students across classes I to IV. All of them are packed into the same classroom. There are 19 girls and 15 boys; the little girls raise their hands to prove their strength.

Teacher-in-charge Manojit Mandal says, “Families are aware that boys will eventually go away. So they are not pressured to go to school from the start.” But girls are encouraged. Because even if they do not excel in studies, an education till Class XII will get them the Kanyashri money and possibly a better groom. Kanyashri is the Bengal government scheme that awards girls from economically backward families Rs 25,000 if they study up to Class XII.

Education means different things for boys and girls. “This trend — of boys dropping out of school to start earning, and women continuing with their education — was reported among the urban Muslim population some time ago,” says Samita Sen, who teaches History at Cambridge University and previously headed Women’s Studies at Jadavpur University. Sen has also worked on migration and gender issues.

Sagar, the island in southwest Sunderbans, stands exposed to the Bay of Bengal, and, like Gosaba, it suffered extensive damage when Aila struck. In Sagar and neighbouring Mousuni, land is disappearing fast under the sea.

Schools in Sagar, too, report a sharp rise in boys’ dropout rates since Aila, say authorities, and in the enrolment figures for girls. The headmaster of Sundarban Janakalyan Sangha Vidyaniketan, Madhusudan Ghorui, says the difference between girls’ and boys’ enrolment numbers is obvious from junior school.

But that does not necessarily mean empowerment for girls.

As Priti Mahara, director of policy, advocacy and research at Child Rights and You (CRY), points out, “The question is, what happens to the girls once they have finished school and the incentives have been earned. Has the system changed enough to make working a non-negotiable option for girls as it is for boys? The answer is an emphatic no.” Education, poor quality education, is not able to combat age-old social mores.

The migration of boys from the Sunderbans is a result of the aftermath of Aila, as well as the effects of climate change and a poor education system that offers little. And the last but not the least crucial driver is the mobile phone.

A World Wildlife Fund (WWF) policy document of 2011, authored by Anamitra Anurag Danda and Gayathri Sriskanthan, cites data to show that while the frequency of storms, surges, depressions and cyclones has actually decreased in these parts, their intensity appears to be increasing.

A recent survey, part of the international “Deltas, Vulnerability and Climate Change: Migration and Adaptation” (Decma) series, links climate change and migration in the Sunderbans. It also brings out its gender dimension. Conducted between 2014 and 2018 and covering 51 blocks in South and North 24-Parganas — the 19 CD blocks that constitute the Indian Sunderbans belong to these two districts — the study reports that among those migrating, 83 per cent are men and 17 per cent women. Most are in the 20-30 age group. One reason for migration, according to the Decma study, is “failed adaptation in the areas which are under stress due to climate change”.

Migration itself is regarded as a successful adaptation strategy, bringing a new prosperity in a place where agriculture, fishing and collecting forest produce were the traditional occupations; they yield littler and littler. Boys, or men, from the Sunderbans who leave for “Chennai” or “Kerala” (euphemisms for any part of southern India) or Calcutta to work as labourers, often in the construction business, earn much more than they did at home.

Since cyclone Aila, the saline water that flooded the fields has receded from places such as Kumirmari. Some parts are back to growing paddy. So oftentimes the men who leave to work elsewhere come back during winter at harvest time. That gives households two incomes.

“Before Aila, we used to earn about Rs 6,000-Rs 7,000 per month from cultivating rice. Now we earn between Rs 15,000 and Rs 20,000 as masons,” says Paritosh Gayen of Kumirmari, who works in Calcutta but was back in December. His brothers work in south Indian cities. His 20-year-old son Kunal does not know what to do with his higher secondary-level education, but he does not want to be a labourer. Gayen’s daughter, a high school student, is less anxious. She will get married.

The migration money has made many women happy. A smiling Geeta Sanpui from Bali village No. 9 in Gosaba block is an example. “I can buy my children snacks even,” says a proud Sanpui. Her husband works in several places as a migrant labourer.

“You cannot imagine how poor most people were here even two decades ago,” says Chitta Roy, a resident of Satjelia. “My wife’s family would live on roots of water plants as there would be no other food. Such poverty is unheard of now,” he adds.

But poverty relieved by a remittance economy is not good news, stresses Danda, senior visiting fellow at Observer Researcher Foundation in Calcutta. “The money that is being earned is not going into production, but for consumption,” he says. Besides, if the people are finding work elsewhere now, what guarantee is there that they will be absorbed in those labour sectors in the future, he asks.

The new money is breeding unease as well. “The Sunderbans has changed drastically,” says Pratima Mishra, a senior member at the Tagore Society in Rangabelia. “The money has brought in alcohol. It has brought in diseases,” she says. “Boys don’t play football,” says Bimalkrishna Mandal, teacher-in-charge at Dayapur P.C. Sen High School. “They are glued to their mobile phones.”

The money is helping girls. Families can spend on their clothing, food and education, already incentivised for them. If villages report boys missing, they also report a sharp drop in minor girls getting married. Educated girls make better mothers, all agree.

But, like many a tale, this one has a twist. Villagers seem to be reeling from another fallout of their “empowerment”. Boys will be boys, but with the new money, and the mobile, even the girls have become “uncontrollable”, every second person complains.

“They are running away all the time,” says an elderly Kumirmari resident. “Even married women. They are talking all the time on their phones,” he adds. Who she is running away with does not matter. 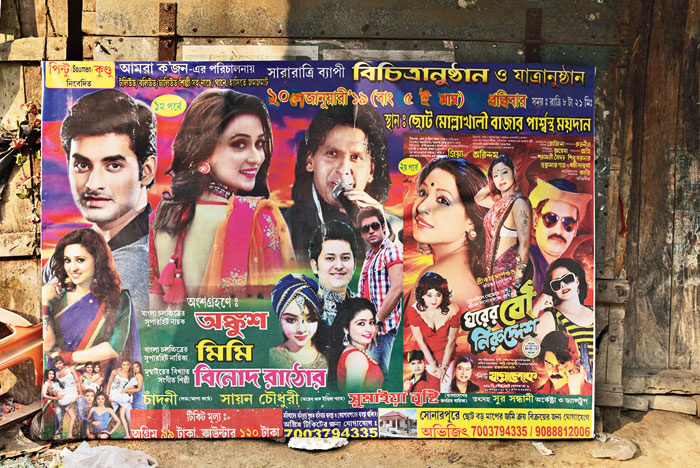 Gone Girl: Poster of a jatra on the missing housewife
Mrinmoyee Sinha

At the beginning of the year many of the ghats in the Sunderbans were wrapped in flex banners announcing a jatra. It had on it the picture of Mimi Chakraborty, the actress who is now a Trinamul MP. It read: “Mobile e metecche desh…/Ghorer bou niruddhesh… The mobile is rampant everywhere/Your wife is to be found nowhere.”

Women acting on their own have always troubled patriarchy. Cherchez le mobile. Cherchez la femme. Meaning, look for the woman.

Sunderbans to Venice, saga of a sinking world