The leaders, some of whom enjoyed enormous clout in their areas for years, suffered stunning reversals in the civic polls that saw a sweeping victory for TMC 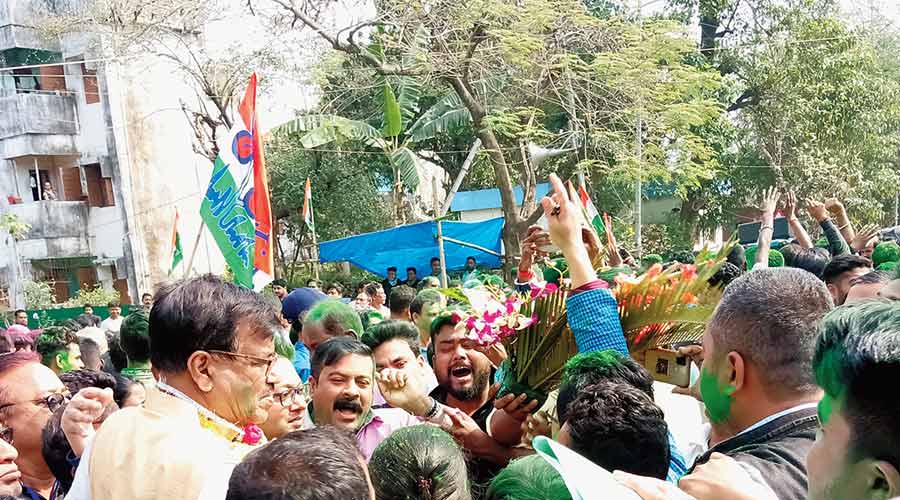 Trinamul Congress leader Rabindranath Ghosh celebrates his win along with party supporters in Cooch Behar on Wednesday.
Picture by Main Uddin Chisti
Our Bureau   |   Published 03.03.22, 02:45 AM

Several prominent leaders could not ensure the victory of their party on their home turf in Sunday's civic polls whose results came out on Wednesday. These leaders, some of whom enjoyed enormous clout in their areas for years, if not decades, suffered stunning reversals in the civic polls that saw a sweeping victory for Trinamul. The Telegraph takes a look at leaders who suffered loss of face:

Result: The so-called Adhir magic didn’t work as Trinamul snatched municipality from the Congress, winning 22 of 28 wards. Congress won the remaining six. Congress even failed to grab power in any of the district's seven municipalities that went to polls on Sunday. In the previous polls, Congress ruled in five of the seven civic bodies.

Significance: This is the first time in the past 35 years when any political party apart from Congress won the Berhampore Municipality

Result: The municipality known as the citadel of the Adhikari family went out of Suvendu’s hands. Trinamul won 17 seats of the total 21 and captured the civic body.

Significance: Contai Municipality had been under the control of Suvendu Adhikari's family since the 1980s with father Sisir Adhikari.

Significance: Kharagpur area, including the municipality, was a stronghold of BJP since the 2016 Assembly polls under the leadership of Ghosh who then became the Kharagpur MLA by defeating long-term MLA and Congress veteran Gyan Singh Sohanpal. In the 2021 Assembly polls too, the BJP had won the Kharagpur seat.

Result: Trinamul swept all the 25 municipalities in the districts including eight in which Singh was in charge in these civic polls.

Significance: Since the 2014 Lok Sabha polls, the BJP had shown growth in a large part of the district mainly in Barrackpore LS constituency. Areas like Garulia, Bhatpara went under control of the BJP under Singh.

Result: Overall loss apart, the saffron camp had to face defeat in South Dinajpur, Majumdar’s home turf where Trinamul won both in Balurghat and Gangarampur.

Significance: The state BJP chief had to bite the dust as his party failed to win even one of the 108 civic bodies of the state.

Significance: Since 2007, when Gurung had floated his party, the Morcha held sway across the hills in all elections. This time it couldn’t.