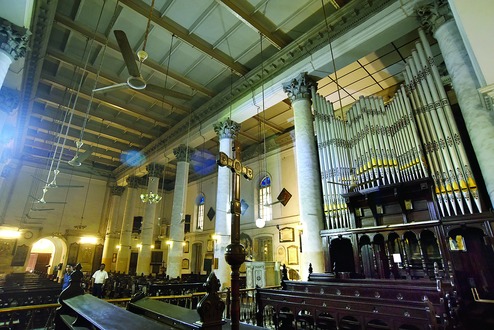 Johnny had been an unmissable presence during Sunday prayers at the church for years, his back to the congregation but his music always upfront in its purpose. On Fridays and Saturdays, he would play almost all day. Over the years, he became as famous as the grand instrument he played.

Noel Ronnie Purty, Johnny's brother, told Metro on Thursday that his sibling inherited his love of the organ from their father, who had also played the instrument in a church. An alumnus of Assembly of God Church School and St Xavier's College, Johnny was wedded to music and so remained a bachelor in life.

"He had a cardiac arrest around 3.45pm. A doctor was called and he pronounced Johnny dead," Noel said.

A memorial service for Johnny was held at Wesleyan Church on Thursday, from where his family and friends proceeded to the Bhowanipore cemetery for the funeral.

"The hall was packed today. He was a master at playing the organ," said Peter Hyrapiet, a close friend of Johnny.

The pipe organ at St John's Church on Council House Street was installed in the early nineteenth century and remains the grandest in Calcutta. "I have seen Johnny play even when there was none in the church. He used to play the whole day because he loved doing so," said Subhadip Mukherjee, a friend and member of the Church of North India (CNI) that runs St John's.

A college teacher who had visited St John's last winter with her colleagues remembers the warmth with which Johnny greeted them. "He escorted us in. As we went around the church, Johnny started to play the organ. He seemed so happy just playing for us. It's shocking to hear that he is no more," she said.

At least five churches in Calcutta have pipe organs but regulars say that the one at St John's is the grandest in terms of the quality of sound. Johnny's finesse had as much to do with it as the maintenance that is put in to keep the instrument in shape.

Johnny also played the pipe organ at Wesleyan Church on Sudder Street for two decades. He had been playing there before he first touched the instrument at St John's.

Mukherjee, whose blog Indian Vagabond has a detailed guide to St John's Church, explained that the instrument has "stops" on either side of the seat that are adjusted to produce the sound the musician desires.

Johnny knew how to adjust these to produce the right music at the right moment, he said.

While a pipe organ player sits with his back to the audience, there is usually a mirror in front that enables the person to see the congregation and play to it.

Johnny's death means St John's Church will have to look for a musician to take his seat. "We are looking for a new player as quickly as possible," said Pradeep Kumar Nanda, the vicar at St John's.

The church, whose construction started in the late eighteenth century, stands on land gifted by Maharaja Nabo Kishen Bahadur of Sovabazar.