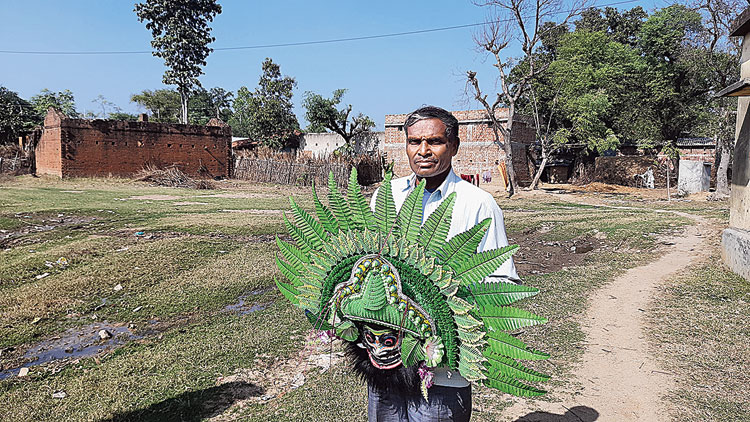 The fear of the National Register of Citizens has rattled a family that boasts of an internationally acclaimed artiste and Padma Shri award winner.

Kartik Singh Mura, a famous chhau dancer and son of Padma Shri winner Gambhir Singh Mura, has a couple of questions to ask the Narendra Modi government — Is my dad’s Padma Shri award not enough a proof of citizenship? Is the passport with which he has travelled with his father to several countries, including Japan and France, not enough to qualify him as an Indian?

Sitting at his home in Purulia’s Charida village — a place popular with tourists for the masks that chhau dancers wear during their performances are made here — Kartik, who is in his sixties, said: “I have heard that the government is planning to issue us fresh citizenship. Since the Citizenship (Amendment) Act was passed, I am afraid that my family will have to show land papers. The mutation of land has not been done as there is no death certificate of my father. How can I establish I am his son?”

Kartik, who dropped out of school after Class V, said his father had been born in 1930 at Pitidiri village in the Ayodhya hills. Gambhir was awarded the fourth highest award of the country, Padma Shri, in 1981 by the Union government for his contribution to chhau, the traditional dance form of the tribals that has its origins in eastern India.

Purulia is home to the dance form that artistes, who wear masks, perform sequences from epics and mythology. Mahishasuramardini, Avimanyu Badh (episode of Abhimanyu being killed in the Mahabharata) and Haradhanu Bhanga (story on Lord Rama’s trying to break the Haradhanu to marry Sita) have been made popular through the performance of Chhau dancers.

Sources said there were at least 6,000 families in the districts involved with the traditional dance form and more than 1,000 people part of the business of making masks. Most of these artistes and artisans fear implementation of the NRC and the CAA would create problems for them because they hardly have documents, including death and birth certificates.

Karthik said there was no death certificate of his Padma Shri winner father who had passed away in the November 2002.

“My father died while he was travelling on a train from Calcutta to Purulia. We never thought we would require our father’s death certificate. After the CAA came into effect and there are talks of the NRC, I have applied for mutation of land that remains in the name of my father. I don’t know whether the mutation process will be done,” said Kartik.

He said there were very few families at the village who had land documents of their forefathers or their death certificates to establish inheritance.

“We have land at our village but I never saw any papers. It is our land from the time of our grandfather or great grandfather. If you ask me for land documents, I can’t show them,” said Paritosh Mahato, a young Chhau performer in Karthik’s troupe.

Uttam Sutradhar, a former gram panchayat member in Charida and an artisan who makes Chhau masks, said it had become a problem for the entire village to visit government offices in Baghmundi to get mutation records transferred in their names.

“Here all people are poor and run their families either by making masks or by performing Chhau. We never thought that a time would come when we need to have documents as proof of our citizenship,” said Sutradhar.

Hangeswar Mahato, the chairman of Manbhum Cultural Academy, also said that there was real fear and panic among Chhau performers after the CAA was passed.

“The tribals do not have the practice of keeping land documents or even death certificates. The CAA and NRC have come as a major concern for them,” said Mahato.