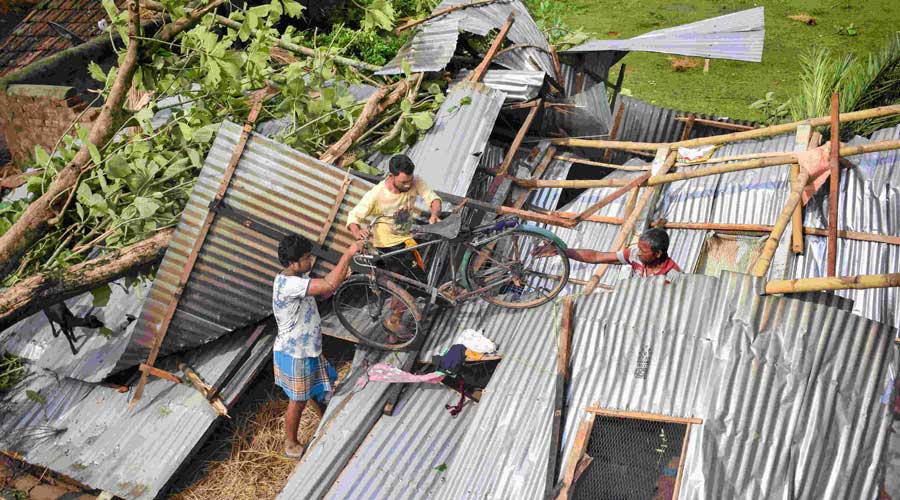 A view of an uprooted tree and damaged house after cyclone Yaas, at Santipur in Nadia district.
PTI file photo
Our Special Correspondent   |   Calcutta   |   Published 05.06.21, 01:53 AM

A seven-member inter-ministerial team from Delhi would visit areas hit by Cyclone Yaas in South 24-Parganas and East Midnapore and make on-spot assessment of the damage.

The team headed by S. K. Shahi, joint secretary in the ministry of home affairs, is scheduled to reach Bengal on Sunday. It would visit some of the affected areas and hold meetings with officials in the two districts and Calcutta for three days.

The visit of the central team holds significance in the backdrop of a tussle between the Union government and the state following chief minister Mamata Banerjee’s non-attendance at a meeting convened by Prime Minister Narendra Modi in Kalaikunda last week to review the post-cyclone relief operations.

Announcing the team members as state guests, the disaster management department asked all officials concerned to ensure that they got due “courtesies and facilities”.

“It is therefore requested that due courtesies and facilities may kindly be extended to the VIP and party during their visit to this state,” reads an order issued by the disaster management department on Friday. Sources said such a clear directive was not usually spelt out in government orders after declaring the team members as state guests.

“Everybody in the government knows what should be extended to the state guests. But mentioning in the order clearly gives a hint that the state wants to avoid any kind of confrontation with the Centre,” said an official.

Although a section of officials said sending a team to the state didn’t mean that the Centre was ready to announce a handsome amount for Bengal to help in restoration work in the post-cyclone period.

“Central teams had visited the state after Fani and Amphan. But the support the Centre extended after Amphan was too meagre. So, we will do our job by letting the team know about facts. But at the same time, we don’t expect anything,” said an official.

The sources also said it had become imperative for the Centre to send a team to Bengal after the Prime Minister had visited the state following the cyclone.

“So, we don’t read too much into the visit of the central team... We would wait to see if the Union government wants to help the state by allotting some funds which we would require to rebuild damaged embankments,” said a bureaucrat.