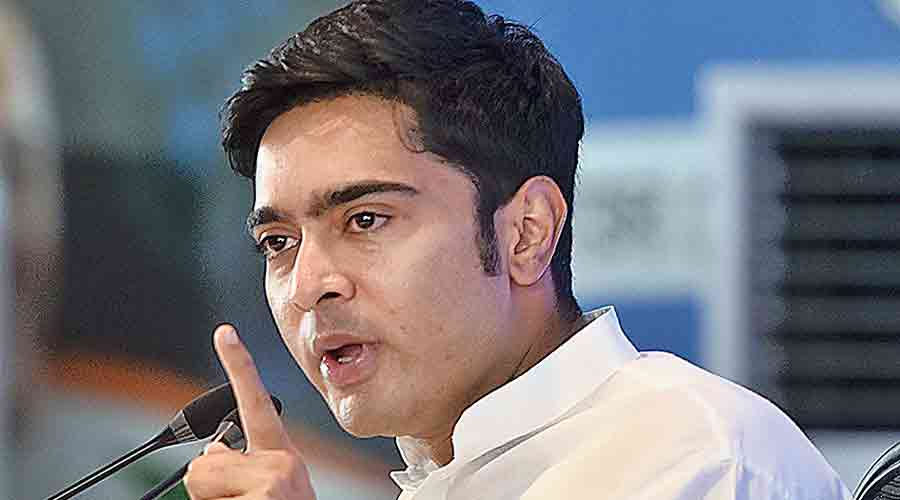 An eight-member team of CBI officers reached “Shantiniketan”, the residence of Abhishek at Bhowanipore in Calcutta, around 11.30am. Sources said Rujira had been questioned in two phases with a break of half an hour in between.

This was the second time that the central agency questioned Rujira, who had earlier declined to respond to summons from the Enforcement Directorate (ED) to appear in Delhi before the sleuths, after February last year.

Abhishek was away in Tripura to campaign for the June 23 bypolls to four Assembly seats when his wife was being questioned in Calcutta. “I am here in Agartala today.... Yesterday, the CBI sent a notice to my wife. Why? Because they don’t want me to come here,” he said in Agartala.

“They are sending the CBI and the ED to put pressure on me.… Do they think that I am scared? No, we belong to Mamata Banerjee’s party,” Abhishek said.

Soon after reaching Agartala around 11am, he participated in a road show from Gandhi Ghat to GB Bazar, a distance of around 4km. Several thousand Trinamul supporters participated in the road show with which the Trinamul launched its campaign for the byelections to the Agartala, Town Bardowali, Surma and Jubarajnagar seats.

Addressing the public rally at G.B. Bazar, the Trinamul MP touched on the issues like inflation, law and order, poor health infrastructure and unemployment in Tripura and blamed the BJP government for it.

“This is not a TMC-BJP battle, this is a battle between the people of Tripura and the BJP. The Trinamul Congress stands by its people.... Don’t feel afraid of the BJP’s goons. Within six-seven months, a new government will be formed in Tripura. That won’t be the “Duare Gunda” government, but the “Duare Sarkar” model of governance. Tripura won’t be run by Delhi, it will be run from Tripura and by the people of Tripura,” he added.

Currently, there are 866 active cases or patients who are reported to be infected in the state. Of them, 844 are in home isolation and 22 in hos¬pitals, according to the state  bulletin.

The state’s positive confir¬mation rate — the samples which tested positive — was 1.85 per cent on Tuesday, on a day when 7,289 samples were tested.

The state’s Covid recovery rate was 98.91 per cent and mortality rate 1.05 per cent on Tuesday.