Cave-ins rise, as do political tempers 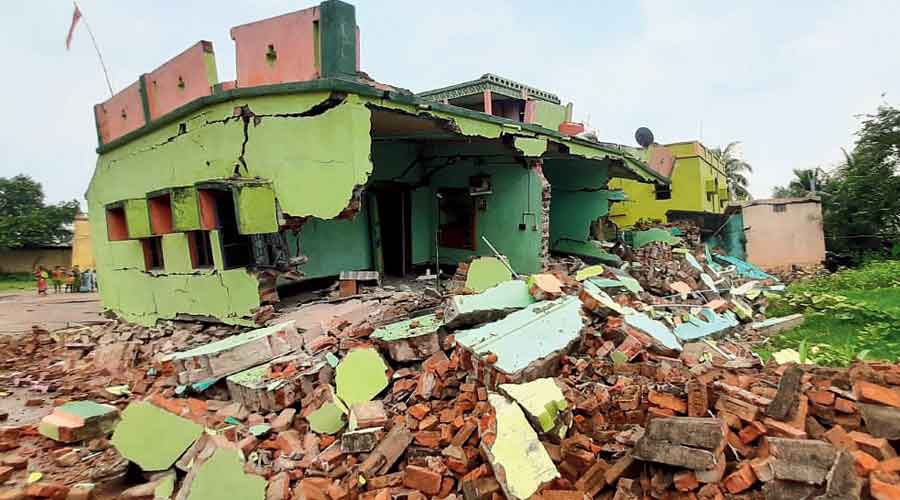 West Burdwan’s coal belt has reported a spurt in subsidence in the past one and half months, triggering a blame game between the Trinamul and BJP.

In July, a woman was buried alive in debris when her home caved in at Jambad village in Andal block. Around two dozen private homes and a primary school were damaged in Harishpur, Andal again, when land caved in, and 1,200-odd people left their homes in fear. In Salanpur block, a truck driver had a narrow escape when his vehicle was trapped under a cave-in.

Harishpur, Jambad and Satgram are among the 146 human habitations with a population of around 2 lakh in the coal belt area identified as subsidence-prone, but people live here without rehabilitation.

Trinamul has blamed the Eastern Coalfields Limited (ECL), under the central government, for not allowing them to build homes to rehabilitate people in subsidence-prone zones. The party, riddled by factional feuds and corruption charges in the district, has taken up subsidence to use it against the BJP with an eye on the 2021 Assembly polls.

The BJP on the other hand has alleged rampant illegal mining backed by Trinamul led to the spurt in subsidence.

Land becomes “unstable” when voids are not properly filled up by those who illegally extract coal, said sources.

“People here elected Babul Supriyo of the BJP that runs the government in the Centre but no one is taking the initiative to address the issue (subsidence) and people are compelled to live in danger. A woman was killed and many people lost their homes to subsidence in the past one and half months,” Tiwari said.

The Bengal government, he alleged, got “no cooperation” from the Centre on rehabilitation.

“The ECL does not allow us to construct homes for them on the land we have identified. Our chief minister is trying hard to rehabilitate people but is facing obstacles from the Centre, the BJP MP elected from the area is also not coming forward,” added Tiwari.

Bengal housing development and the Asansol-Durgapur Development Authority (ADDA) planned around 33,000 dwellings to rehabilitate around 2 lakh people. But though they need 400 acres to construct the homes, they received permission for only 172 acres from the ECL.

ECL sources said the area had coal reserves within 600 metres of the surface and could be mined in near future.

“The ECL is only concerned about coal and business, not people. They did not allow us to construct homes on land under their leasehold area with coal reserves,” alleged Tapas Banerjee, a Trinamul MLA and chairman of the ADDA executing the Centre-funded rehabilitation project.

Laxman Ghorui, BJP chief in West Burdwan, however, put the blame squarely on illegal mining. “Trinamul-backed smugglers loot coal from abandoned mines. That leads to subsidence. People know everything. We will stop all such illegal activities after coming to power next year,” he said.