Casual staff of Malda Medical College and Hospital on ceasework

This came after the principal’s office had issued a notice, saying they would not be paid salaries from August because of paucity of funds 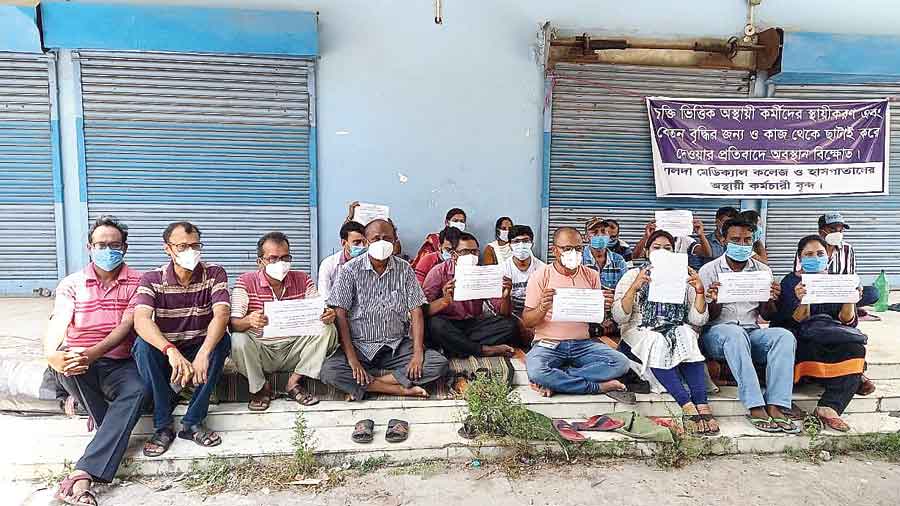 Over 170 contractual employees working in different departments of Malda Medical College and Hospital launched a ceasework and demonstration on Friday after the principal’s office had issued a notice, saying they would not be paid salaries from August because of paucity of funds.

The notice was issued on Thursday afternoon.

“This is nothing but a move to retrench us. Many of us have been working here for 10 to 12 years. Our services were engaged throughout the Covid-19 pandemic also. Any move to remove us from our jobs is disappointing,” said Priya Singha, a contractual employee who works in the office of the superintendent of the MMCH.

Another employee who participated in the demonstration said the casual staff had taken several initiatives in the past few years to make their jobs permanent.

“But nothing has happened so far. At this point, the state government and the MMCH authorities should see that we work till the age of 60 and are not retrenched. We will continue the movement till our demand is met,” he said.

Sources at the MMCH said around 12 lakh was spent every month to pay salaries to the temporary employees.

“We do not have adequate funds to pay their salaries. We have somehow arranged funds to pay them for July but from August and onwards, it would not be possible for us to pay them unless we receive additional cash from the state government. We have informed senior officials of the state health department about the issue,” said Partha Pratim Mukherjee, principal, MMCH.

Asked whether the absence of the contractual employees — none of them joined their duties on Friday — was affecting different works at the facility, Mukherjee said the situation was being monitored.

Rajarshi Mitra, the district magistrate of Malda who is also the chairman of the Rogi Kalyan Samiti at the MMCH, said: “We are waiting for necessary instructions from the state health department to take any further decision.”