The demand had already been raised in states like Maharashtra, Odisha, Madhya Pradesh and Bihar 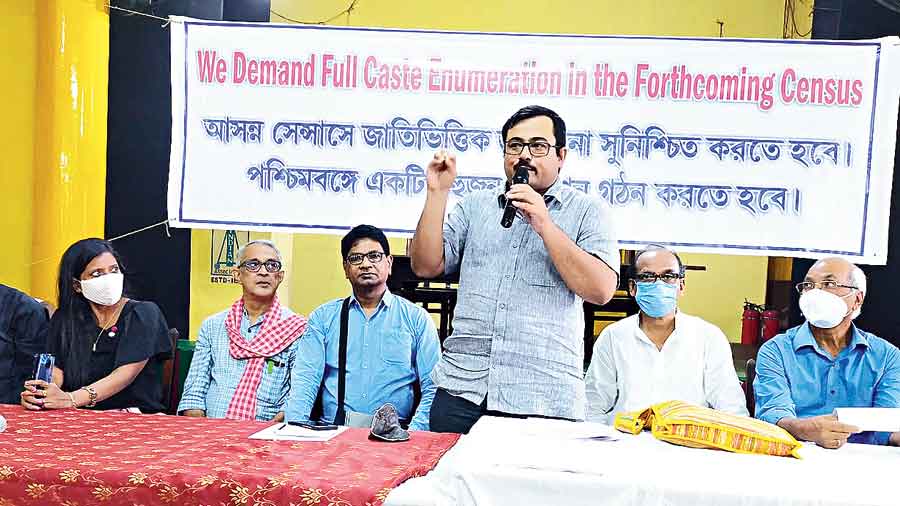 Prominent civil society members in Bengal have written to Narendra Modi and Mamata Banerjee, demanding a caste-based enumeration in the forthcoming census for the socio-economic development of backward classes.

The demand for the caste-based census had already been raised in states like Maharashtra, Odisha, Madhya Pradesh and Bihar.

“The Union government recently told the Lok Sabha that it would not enumerate caste-wise population as a matter of policy.... We are against this and believe that for the socio-economic development of the backward classes, it is important to have a caste census. Hence, we have written to the Prime Minister, urging him to ensure a full caste enumeration in the census. We wrote a similar letter to the Bengal chief minister as well,” said Prasenjit Bose, the convenor of the Joint Forum Against NRC and one of the 16 signatories to the letters.

Addressing a news conference in Calcutta on Tuesday, Bose said they had also demanded that the NPR process — which according to the signatories is the first step towards the implementation of the Citizenship Amendment Act — be de-linked from the census.

Although the demand for the caste-based census has been heard from different parts of the country for years, the matter assumed seriousness before the 2019 general election when the then Union home minister, Rajnath Singh, told Parliament that the 2021 census would carry data on the Other Backward Classes.

The promise, however, is unlikely to be fulfilled as the Narendra Modi government has expressed its reluctance on the exercise.

The issue of counting of backward classes in the forthcoming census was recently pushed by an all-party delegation from Bihar, which included representatives of the RJD and BJP ally JD(U), which met Modi. Another delegation led by Madhya Pradesh chief minister Shivraj Singh Chouhan also met the Prime Minister and demanded counting of the OBC groups.

Against this backdrop, the letter from the civil society members — belonging to groups like Dalits, Pasmanda Muslims and Adivasis — shows that the demand is getting momentum even in a state like Bengal, where discussions on class had kept caste issues under the wraps during over three decades of Left rule.

The civil society members said the class-based inequality in the country couldn’t be understood without properly identifying the caste composition of the demography.

They also said they would intensify their demand in the coming days.

“Our society is divided between the haves and the have-nots. The enumeration of castes will help the have-nots get a better life, which is why the haves are against it...,” said Avik Saha of Swaraj Abhiyan’s Bengal unit.

According to one of the signatories, who spoke to this correspondent on condition of anonymity on the sidelines of the news conference, the objection of the BJP government at the Centre to the caste-based census has its roots in the party’s fear that such an exercise would dent its carefully constructed caste alliances in several states under the dominance of upper castes.

“The saffron ecosystem functions on the caste divisions rooted in our society. A caste-based census will disturb this vote-yielding environment for them,” this person said before adding that if more states and political parties joined the chorus, the Centre would find it difficult to wish away the demand.