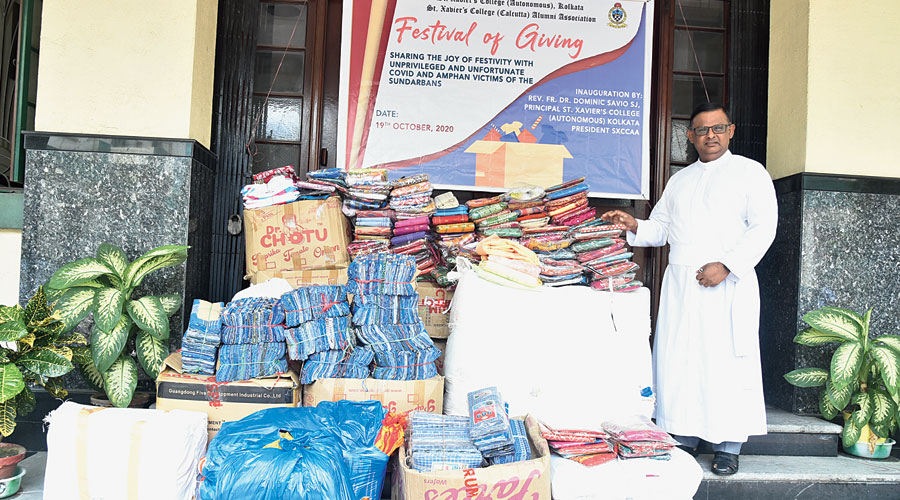 Eight-hundred families in the interiors of South 24-Parganas, for whom the upcoming festivities are a distant dream, got new clothes on Monday.

The distribution camp was organised at Kharimutha and two adjacent villages, less than 10km from Kakdwip. Most villagers are still reeling from the twin blows of Covid-19 and Cyclone Amphan.

The St Xavier’s College (Calcutta) Alumni Association organised the drive. New saris, dhotis and masks were among the clothes distributed on Monday.

A set of mosquito nets, too, were distributed, keeping in mind the threat from vector-borne diseases, an association member said.

The recipients were residents of Kharimutha and two nearby villages, Mollar Chowk and Pukurberia. “Many residents have had their homes ravaged by the cyclone. In the absence of regular income, they are still struggling to make ends meet,” another member said.

Fishing and betel leaf farming used to be the two main occupations of the villagers. Cyclone Amphan, which made landfall near Kakdwip on May 20, flooded water bodies and farmlands with saltwater and left them unusable.

Items that were distributed on Monday were collected from alumni members and college staff for the past week.

On Monday, Father Dominic Savio, the principal of the college, flagged off the drive on the Park Street campus. “We, in St Xavier’s, believe festival is for all — may it be for the poorest of the poor and the joy of festivity increases by sharing with such unfortunates. So, by sending these festival special relief materials, we want to show our love and affection to them.

The college and its former students have organised a series of drives to help the poor and downtrodden for the past seven months. It includes distributing food, essential commodities and medical help in several villages close to its Raghabpur campus in South 24-Parganas.

Towards the end of June, a group of Jesuit priests led by Savio had visited Kharimutha village to distribute food and other relief material to villagers.

“Father Savio has promised to adopt a village near Kakdwip to uplift the socio-economic condition of villagers as well as provide students living there with contemporary education,” an alumni association member said. “The formalities are going to happen soon after police complete the identification process by the end of this year.”