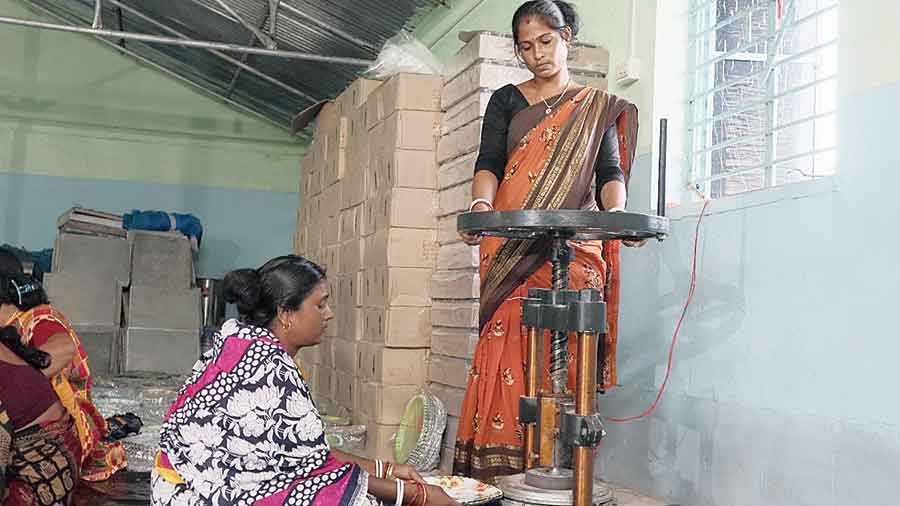 A paper plate manufacturing unit in the Sunderbans’ Jharkhali, run by a team of local women, is set to start commercial production on Monday.

Plastic has for long been the bane of the ecologically sensitive mangrove delta. The danger gets aggravated after every cyclone when hundreds of groups from Calcutta visit the Sunderbans with relief materials, almost all of which wrapped in plastic.

Thermocol plates, plastic water pouches, bottles and cups are dumped in water bodies by relief workers. Much of the plastic waste was left behind by tourists before the Covid curbs suspended tourism. All this, despite an official ban on plastic in the Sunderbans.

The paper plate manufacturing unit is set to supply biodegradable plates to hotels, homestays and boats in the Sunderbans. With the Covid cases on the decline, the hoteliers hope the ban on tourism would be lifted soon.

The unit has come up near the Jharkhali market in the Canning sub-division of South 24-Parganas, around 125km from Calcutta. Over 40 women, from various self-help groups in the Sunderbans, have received a fortnight’s training in making the final product from recycled paper rolls.

The project is being funded by the South 24-Parganas Forest Division. An NGO called the Kolkata Society for Cultural Heritage is executing it by training the women and marketing the finished products. 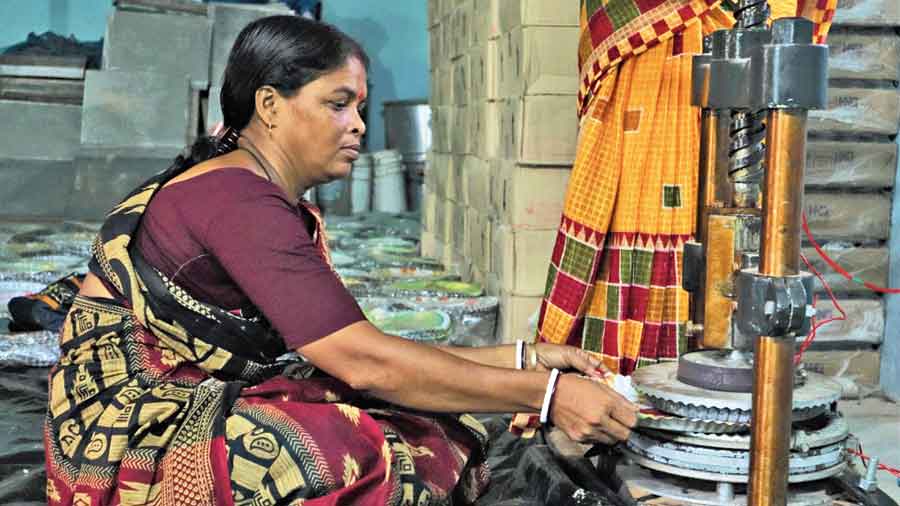 “The project, if successful, will be scaled up in the coming days,” said Milan Mandal, the divisional forest officer of South 24-Parganas.

This newspaper had reported that more than 9 lakh plastic bottles had been flushed out from the ecologically sensitive Sunderbans in 10 days after Cyclone Yaas.

According to estimates of the South 24-Parganas district administration, around 1 crore plastic pouches, 20 lakh drinking water bottles and polythene and plastic packets were dumped in water bodies across the eight blocks - Kakdwip, Namkhana, Patharpratima, Sagar, Kultali, Mathurapur, Basanti and Gosaba.

The presence of huge quantities of plastic has set alarm bells ringing among environmentalists.

Lumps of plastic have been clogging the “breathing roots” of the mangrove trees, causing immense harm to the aquatic creatures in the biosphere reserve. Dolphins and turtles can choke to death if they unknowingly consume plastic, they said.

“The training ended on Friday. Commercial production will start on Monday. To start with, the unit will produce around 600 plates every day,” said Sourav Mukherjee, the founder of the NGO at the helm of the project.

“The bulk of the produce will be sold to local hotels, homestays and boats. The rates will be competitive so that they choose our products instead of plastic, which is anyway banned by the government. We also want to supply our products to retail players in Calcutta,” said Mukherjee.

The unit is a lifeline for its workforce, struck by twin blows of the pandemic and cyclone. The women will not get fixed salaries but a commission on every product sold, said Mukherjee.

Shuktara Bachori is one of the women working at the unit. Her husband is a fisherman. His income has dwindled since April, when fresh Covid curbs set in and taking the catch to markets became challenging.

Kajal Adhikari used to grow seasonal vegetables on a small plot of land. But the cyclone inundated her land with saline water, rendering it infertile. “This (the unit) is my only shot at any income now,” she said.