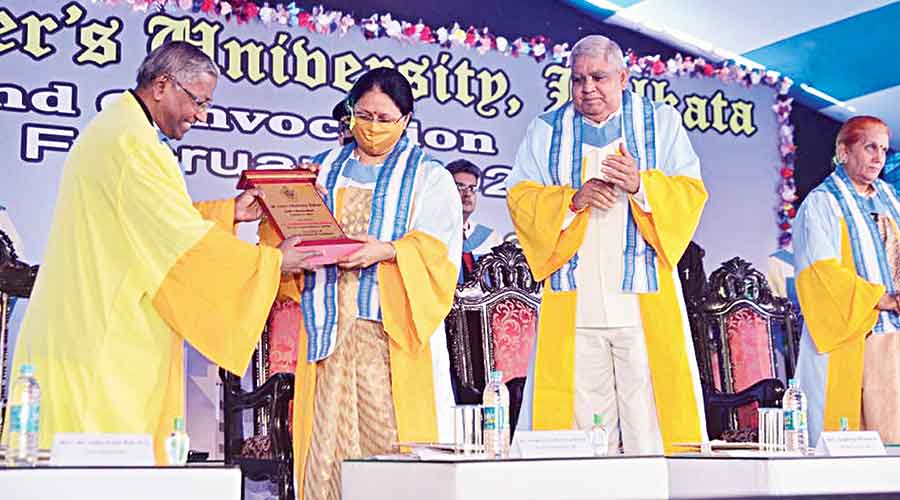 St Xavier’s University aims to form men and women who will be “global agents of Vasudhaiva Kutumbakam — the world is one family”, vice-chancellor Father Felix Raj said in his convocation address on Saturday.

The VC later told Metro: “Since the world is one family, everybody has a right to comment on atrocities committed in any part of the world and that comment should be made in the right spirit and seen in the proper perspective and right spirit.”

St Xavier’s University’s second convocation was held on the New Town campus where only medal winners were awarded prizes and degree certificates.

In his convocation address, Father Felix Raj said: “In this temple of knowledge we aim to form men and women who will be global agents of Vasudhaiva Kutumbakam — the world is one family. Therefore, the Jesuit dictum ‘give us your child, we will return to you a man, a citizen of the country and the child of god’.”

Explaining why global agents of Vasudhaiva Kutumbakam were needed, he later told Metro: “Today we are fragmented on the basis of caste, colour and religion. Then there is a lot of divisive forces and there is a lot of violence, inhuman behaviour, expressions. The world is going through a period of turmoil. That is why we need to produce agents of social change who will go out as ambassadors of peace and harmony.”

As the world is one family, therefore anything inhuman or an atrocity in any part of the world affects everybody, Father Felix Raj said. “What happens in the United States influences everybody. What happens in India also influences many people across the world. It is economically true, socially true, politically true. One is bound to have an opinion. You need to go beyond political division, fragmentation of colour and countries and see the comment in the proper perspective and right spirit. The opinion should be heard.”

The Centre on Wednesday took the extraordinary step of schooling celebrities in social media etiquette after singer Rihanna and climate activist Greta Thunberg tweeted about the farmers’ protest and the Internet ban and drew global attention to the movement and the clampdown.

“There used to be this spirit of oneness, beyond borders, beyond boundaries. We need to build human families,” Father Felix Raj said.

He gave a report on the academic, research and extra-curricular activities carried out in the last one year despite the pandemic.

Only 76 of 451 graduating students (the first three rank holders in each subject) were present at the ceremony and were awarded medals according to their ranks. The others will go to the campus in a staggered way later to collect their certificates.

The event was live streamed on digital platforms.

Sanghamitra Bandyopadhyay, the director of the Indian Statistical Institute, was the chief guest for the ceremony.

Governor Jagdeep Dhankhar was the guest of honour.