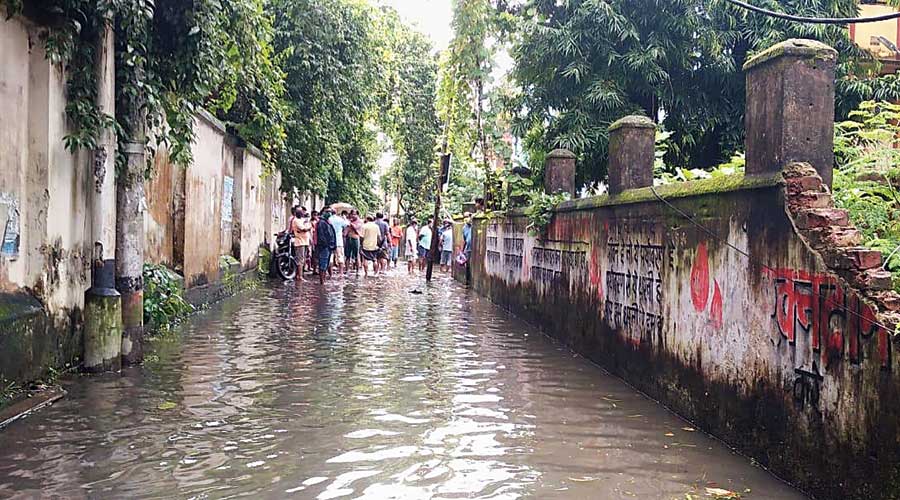 The waterlogged lane in Shibpur where the two men were electrocuted on Thursday.
Picture obtained from police sources
Monalisa Chaudhuri   |   Calcutta   |   Published 21.08.20, 02:25 AM

Two men returning home after a dip in the Hooghly were electrocuted near the botanical garden in Shibpur on Thursday afternoon after they came in contact with a lamp post barely seven hours after a CESC team inspected it following a complaint and declared it safe.

People in the neighbourhood said the technician in the CESC team told them there was no fault in the post and that some of the branches of an overhanging tree, in which wires were entangled, needed to be pruned. No one turned up to trim the tree.

Residents said Suman Sharma and Srikanta Das, both in their 30s, might not have died had the branches been pruned in time.

They said the wires were lying entangled with branches for a long time and caused a huge spark and sound that prompted one of them to register a complaint with CESC on Thursday morning.

Officials of the utility said they received a complaint about a loud sound in a post around 6.30am and a team went to inspect the spot but did not find any fault. “There was a need for trimming of some branches for which an internal team was alerted,” the CESC spokesperson said. “But it started raining heavily after that (the morning inspection) and the place got waterlogged.”

Officials in the Howrah Municipal Corporation said they had not received any requisition from the power utility for trimming the tree.

Asked to respond, the CESC spokesperson said: “As no fault was found during the inspection in the morning, there was no reason to rush for the trimming as well.”

The spokesperson also said the tree trimming was not related to the electrocution. “There are several wires that run through trees across the city. Then all the wires could have caused electrocution.”

Around 1pm, Sharma and Das accidentally came in touch with the lamp post outside a government quarters while trying to negotiate the waterlogged lane. Both got electrocuted and were declared dead at the Howrah State General Hospital, police said.

An unnatural death case has been started by AJC Bose Botanic Garden police station. “We have not received any specific complaint till now,” said a police officer late on Thursday.

CESC officials said soon after the incident was reported in the afternoon, their team had re-visited the spot and switched off the supply line. “Necessary investigation to find the cause of the incident is on,” the CESC spokesperson said.

The need to trim a tree with entangled power lines and the lack of action would ring a familiar alarm bell for many Calcuttans.

After Cyclone Amphan had hit the city on May 20, Metro had published several reports on how lack of coordination between the linemen and the authorities responsible for trimming or removing uprooted trees was hurting the efforts to clear the debris left by the storm.

In May, a young fireman was electrocuted in Belur while trying to saw the branches off a partially uprooted tree that had got entangled in electrical wires, allegedly after CESC had told his team that the supply to the area had been cut off. The death of the fireman had prompted a revised protocol among fire officials that they would not cut trees after a power cut, unless a technician of the power supply agency tests the line himself and declares it safe.

The place where the incident happened on Thursday is frequented by hundreds of morning walkers. It was deserted on Thursday because of the lockdown.

After the deaths, residents demanded “stern action” against the technician who had first visited the spot in the morning. Morning walkers demanded compensation for the families of the dead.