Oxygen gifted to sub-divisional hospital on BC Roy’s birthday 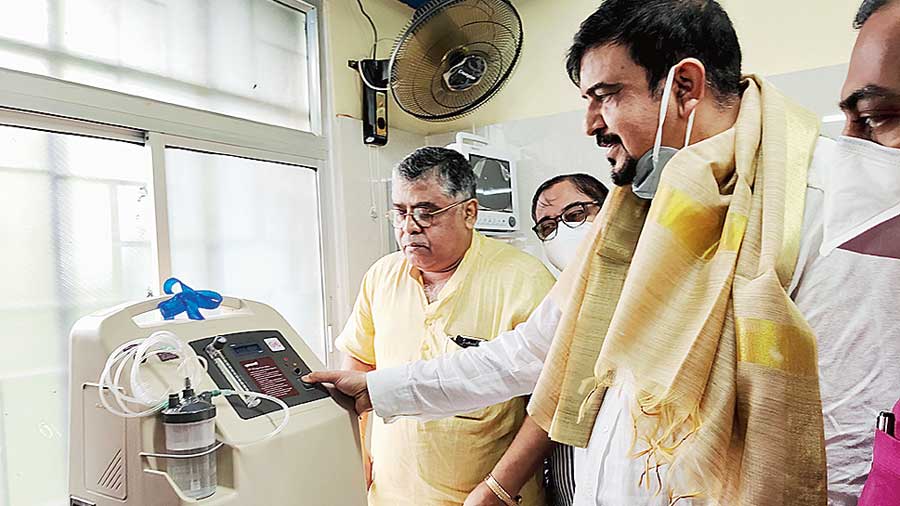 Minister Sujit Bose checks out one of the four oxygen concentrators handed over to the hospital on Doctors Day by the Rotary Club of Aarohee Calcutta. Hospital superintendant Partha Pratim Guha is to the right.
Picture by Debasmita Bhattacharya
Sudeshna Banerjee   |   Salt Lake   |   Published 09.07.21, 02:19 AM

Four oxygen concentrators were handed over to the Bidhannagar Subdivisional Hospital on Doctors Day by the Rotary Club of Aarohee Calcutta.

“Most oxygen concentrators in the market can produce only five to six litres of oxygen per minute. These are more expensive ones with a flow rate of up to 10 litres per minute, which can otherwise be achieved only through high flow nasal canula,” said hospital superintendent Partha Pratim Guha.

The hospital treats post-Covid complications in patients discharged by the Chittaranjan National Cancer Institute. “We take them in if they have complications after they test negative for Covid. Often they need high flow oxygen. So these concentrators are really going to be of use in their treatment,” he added.

The machines were handed over by president Swapan Basu and project co-ordinator Subrata Munshi of the New Town-based club. “Ours is a new club, chartered only in February. This year we have been advised by Rotary International to work for Covid relief. We have donated another nine concentrators to a Khardah hospital,” said Basu.

Fire and emergency services minister Sujit Bose recalled his own Covid experience. “I was the first among the ministers to catch Covid. I was in the ICU (intensive care unit) for nine days. I saw how doctors and nurses were fighting to get us fit. Still some of my colleagues did not make it, like Tamonash Ghosh, who was next to my bed in the ICU.”

Referring to the oxygen crisis during the second wave, he lauded the work done by NGOs.