The project was launched on July 4 at DG 7, an empty plot next to Ohio Hospital 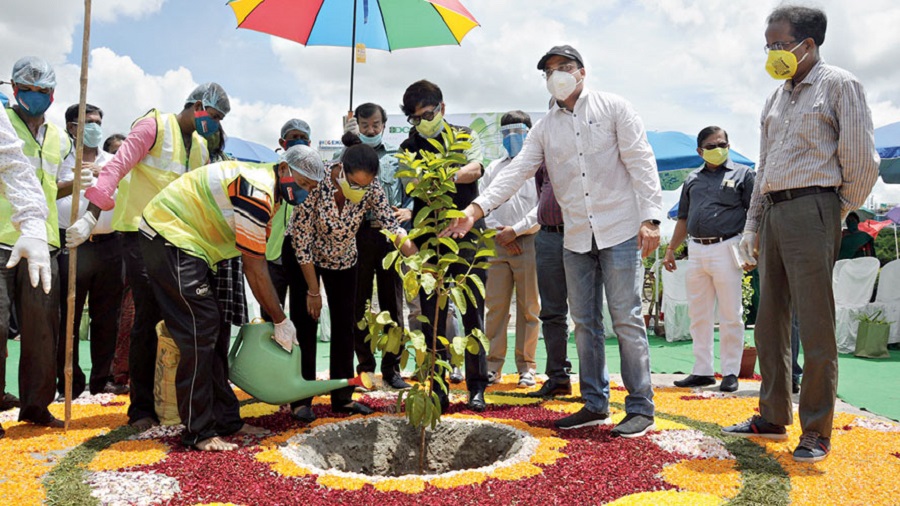 The New Town authorities have begun an initiative to plant 10,000 trees across the township as a re-greening project in the aftermath of cyclone Amphan. As reported in an article on June 19 in The Telegraph Salt Lake, many of the trees will be planted on empty plots.

Sen then planted a guava tree in the plot along with chief guest Mitali Rakhit, vice-chairperson of Ohio Hospital, and Raju Das, chief conservator of forests, conservation and extension, forest department.

“I have travelled the world but never have I seen such devastation as during Amphan,” said Rakhit. “We need to revive the greenery that was lost.” Das too pledged his support to the New Town authorities.

Sen said that they have been working with experts over the past month and learnt that the most suitable trees to plant are indigenous ones. So they will be planting neem, coconut, taal, pomegranates, batabi lebu etc. “Over four thousand trees had fallen during Amphan out of which  most were rescued and some even have new leaves sprouting. Even then, hundreds died and we have to make amends.”

The plot next to the hospital is not Hidco land and the authorities have sought permission from the owner before planting these trees. “We cleared this land of parthenium and puddles and have promised to transplant these trees elsewhere whenever the owner wishes to start construction. We are also choosing trees that can be easily transplanted later,” he said.

The second round of plantation will take place on July 14 and the authorities will take it forward as and when they find more plots. “We don’t aim to go for carpet area in our plantation drive. We will plant on whichever plot becomes available. Nine more plots are in hand now.”

A Facebook page called Greening NewTown was launched too and it will be updated accordingly. Any individual planting a tree on his land will be given an e-token as certification in block chain, which will make it immutable and non-replicable. The technology is already in use in Hidco to issue birth and death certificates. “They will have to send photos of the tree which we will verify,” he said.