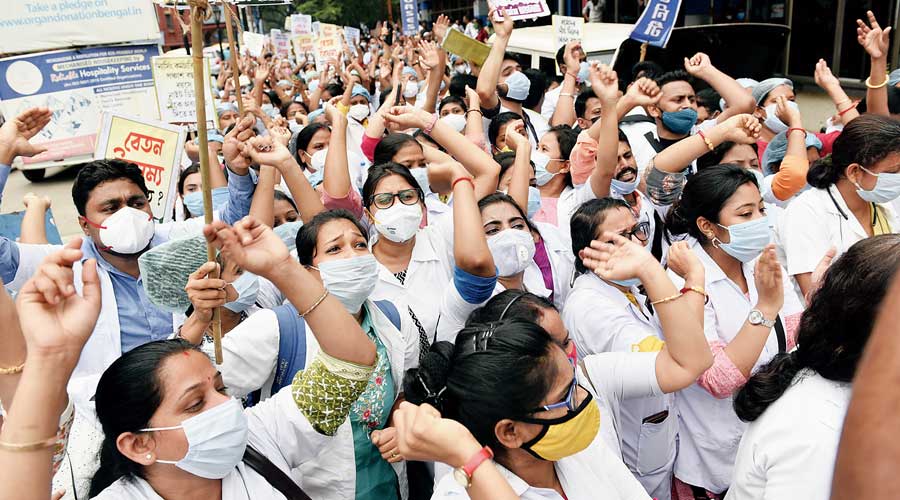 About 3,000 nurses from state government hospitals marched in the SSKM Hospital compound on Monday demanding an end to an alleged disparity between their pay and that of other government employees with similar qualifications.

The nurses have been holding a sit-in at SSKM since July 26 on the issue.

The protests have gained traction because of the timing — more than a year into the Covid-19 pandemic, during which nurses played a critical role in tending the sick, earning accolades from all quarters.

The protesting nurses, however, said that while the government was lauding their efforts, it has not raised their pay.

“Nurses in the government sector have been putting up with pay discrimination for years. A nurse with a diploma should be entitled to Level-12 pay but they get Level-9 pay. Nurses across all categories - diploma-holder, BSc-degree holder, experienced, fresher - get less than what they should be entitled to,” said Bhaswati Mukherjee, the secretary of Nurses Unity, an association of nurses.

“An engineering diploma-holder gets Level-12 pay. There is a difference of nearly Rs 8,000 between levels 9 and 12. We want an end to this discrimination,” said Mukherjee.

The “pay disparity”, she said, has been there for years and nurses have protested against it time and again.

The state health department had promised to address the nurses’ grievances in 2019, the last time they protested before the current round of agitation, but nothing was done, the protesters alleged.

Chandrima Bhattacharya, the junior health minister of Bengal, said the government would look into the nurses’ demand.

“If they have a grievance, they can raise it and the government will look into it. As the minister of state of the department, I cannot take any policy decision,” Bhattacharya told Metro on Monday evening.

The nurses said they started the protests after realising that the government had ignored all their pleas.

“We had written to the chief minister (also the state’s health minister) on July 7 detailing our grievances, but none from the government wanted to know our demands. We started a sit-in on July 26, yet none from the government felt it necessary to talk to us. We are left with no other option but to hit the streets. But we are assuring patients that services will not be impacted. There will always be nurses in all wards attending to patients,” said a protesting nurse.

The protests, while the country is in the midst of a pandemic, have caught the attention of many in the medical community. Many of the nurses who have joined the protest said they felt hurt by the way they had been dealt with by the government and the health administration.

Nurses monitor patients’ health around the clock. They check the vitals, create channels in a patient’s hand to administer medicines and ensure that medicines are being given to patients in the right dose.

“Doctors come once a day. It is the nurses who monitor patients throughout the day. Nurses have to be present inside Covid wards for much longer duration than doctors. We are not demanding any favour. We are just asking for the right compensation for our services. Won’t a doctor protest if he or she is given a diploma holder’s salary?” asked a nurse who works in a teaching hospital in Calcutta.

Bengal suffers from an acute shortage of nurses as far fewer nurses graduate from the state every year than the requirement.

An official of a private hospital said only 30 per cent of the nurses in Bengal were from the state. The rest are from northeastern states, Jharkhand, Kerala and Karnataka.

The shortage also means that the nurses are often overworked as they spend more time at hospitals than they are supposed to.