New flyover set to decrease commuting time to the airport 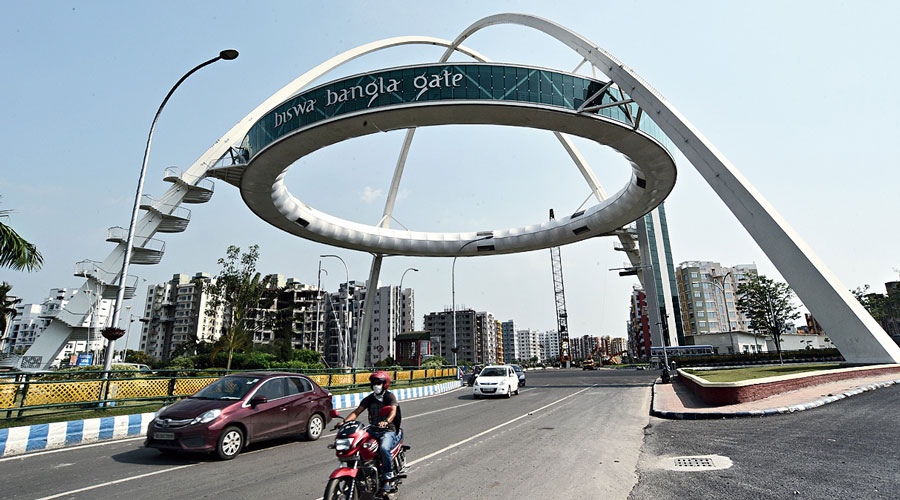 The urban development department has given technical approval for a flyover that will connect Metropolitan on EM Bypass with Biswa Bangla Gate in New Town, officials said. The tender for the project, likely to cost around Rs 800 crore, will be floated after the finance department’s nod comes.

The 3.5km-flyover will take off from Metropolitan and enter Salt Lake over the Chingrihata crossing. It will then take a right turn from the Nicco Park crossing to enter Sector V and run about 800m above the East Calcutta Wetlands before entering New Town, said an urban development department official.

“The flyover will end near the Biswa Bangla Gate in New Town,” the official said.

Officials associated with the planning of the project said the flyover’s take-off point on the Bypass would be close to where the northern ramp of the Parama flyover merges with the artery.

“The idea is that anyone coming from central and north Calcutta via Park Circus and from south and southeast Calcutta via Ruby can take this flyover and reach New Town without getting stuck in snarls,” an official of the urban development department said.

Once ready, the flyover will reduce the commute time between southern parts and fringes of the city and the airport. “It will be a straight drive till the Biswa Bangla gate without any signal. What takes about 25 minutes now will be covered by 10 minutes when the flyover is ready,” said another official.

One arm of the flyover will get down near the Nicco Park and another arm in Sector V. “The arm that gets down near Nicco Park will be useful for people heading to parts of Salt Lake other than Sector V. The arm going down in Sector V will benefit those who go to the tech hub for work,” the official said.

“The department has decided to build the flyover in phases. In the first phase, the stretch between Metropolitan and Nicco Park will be built.”

Engineers and officials associated with the project’s planning said a traffic study on the possible rise in the number of vehicles headed towards Sector V in the next few years prompted them to split the project into phases.

“The study shows a leaping jump in the number of vehicles going to Sector V. The bulk of these vehicles will come from Ruby and they will take a right turn from Chingrighata, which is why we want to complete the stretch between Metropolitan and Nicco Park, which serves as the entry to Sector V, in the first phase,” the official said.

The urban development department has forwarded the project proposal to the PWD to run a second check. “Since the PWD is handling big projects such as the Tallah and Taratala flyovers, the proposal has been sent to the department for a second look,” the official said.”

The proposed flyover would also act as a replacement for the existing Chingrighata flyover that would be pulled down. A team of bridge engineers has recommended its demolition. The Telegraph reported on Monday that the flyover would undergo repairs soon to make it last another five years, during which the new flyover is expected to be ready.

An engineer said the turn or curvature of the proposed flyover would not be as sharp as the existing ones. The team of bridge engineers called the existing bridge’s geometry flawed because of the sharp curve. Heavy vehicles moving at a high speed find it difficult to manoeuvre the curve and hit crash barriers.

“The proposed flyover will have a much safer curve so that heavy vehicles are not barred from using it,” said an engineer.

In October 2019, the urban development department had asked IIT Kharagpur to carry out a survey and draw up a report on how to decongest the Chingrighata intersection of the Bypass. The report is expected to reach the government shortly.