The new link is expected to benefit thousands of office-goers from Dunlop, Bonhooghly, Ariadaha and other areas on the northern fringes 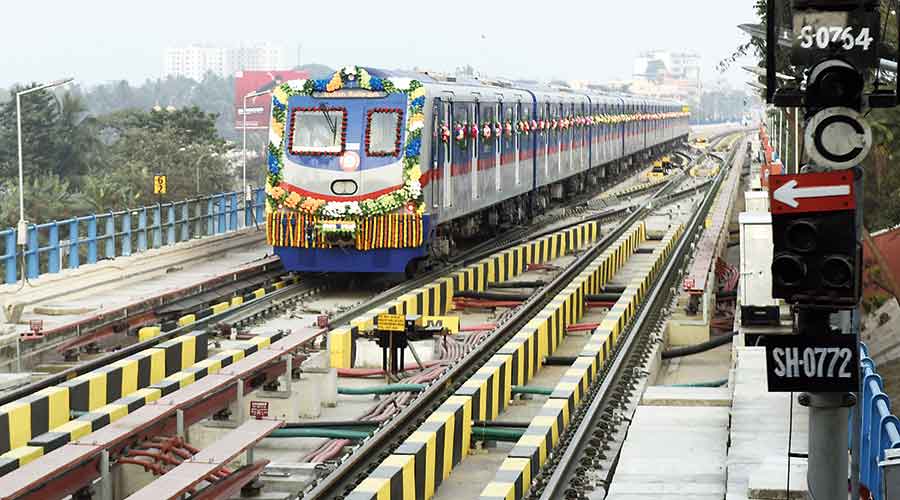 A train decked out in flowers but without passengers left Dakshineswar station at 4.55pm, after Modi flagged off the journey from his dais in Dunlop. The Dakshineswar-Noapara stretch will be open to passengers from Tuesday.

The first passenger train will leave Dakshineswar at 7am on Tuesday, the carrier said. A 31km journey from Dakshineswar in the north to Kavi Subhas (New Garia), the terminal station in the south, is expected to take 62 minutes, said an official.

Metro now runs 240 trains from Monday to Friday. From Tuesday, the count will go up to 244, said a Metro official. But all trains will not run till Noapara.

From Tuesday, 158 (79 pairs) of the 244 trains will run between Dakshineswar and Kavi Subhas stations.

There will be 228 trains on Saturdays, 156 of which will run between Dakshineswar and Kavi Subhas. On Sundays, the carrier will run 102 trains, 100 of which will connect the two terminal stations.

The new link is expected to benefit thousands of office-goers from Dunlop, Bonhooghly, Ariadaha and other areas on the northern fringes. Since the closure of the Tallah bridge in 2019, a large section of these commuters has been using Noapara Metro station, which is not easily accessible via road.

Because of the diversion, the bus routes to Dum Dum from BT Road, already infamous for snarls, have become much more congested.

The 4.1km Noapara-Dakshineswar stretch on elevated tracks goes via Baranagar station. From Tuesday, thousands of commuters are expected to take Metro from the two new stations — Dakshineswar and Baranagar.

Residents of Hooghly and thousands of passengers of suburban trains in the Howrah-Burdwan and Howrah-Tarakeswar routes can also take Metro by crossing the Bally bridge to reach Dakshineswar.

The maximum fare has remained unchanged at Rs 25, the carrier said. But tokens are now suspended in the wake of the pandemic and a smart card is a must for a Metro ride.

The Noapara-Dakshineswar stretch, conceived as part of then railway minister Mamata Banerjee’s Metro extension plan, faced many roadblocks, the construction of a viaduct near the Dunlop bridge being among the most recent.

On Monday, Modi also inaugurated a slew of other railway projects, aimed at improving passenger and freight train infrastructure in this region. Among them was a fourth line between Dankuni and Baruipara (Hooghly) in the Howrah-Burdwan section.