400-plus indigenous parakeets rescued from bus in Durgapur 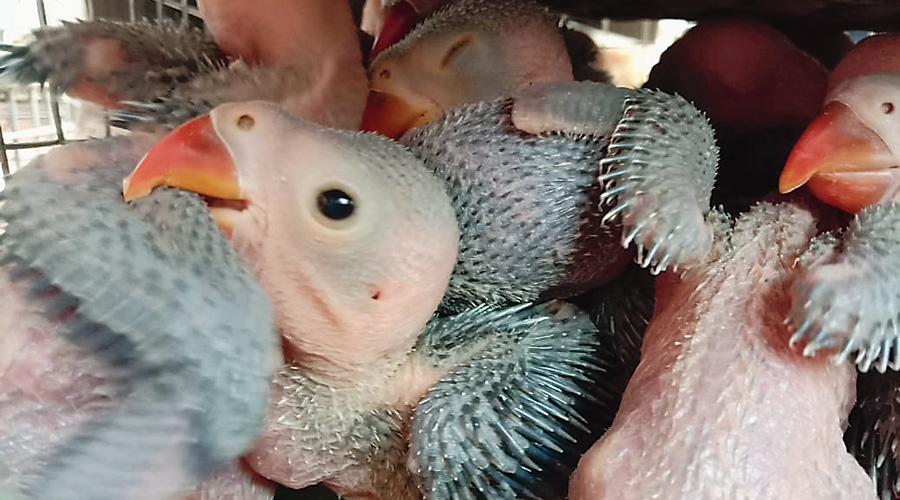 Over 400 indigenous parakeets, most of them barely a few days old, were seized from the boot of a bus in Durgapur by forest officials early on Sunday.

Seven persons have been arrested, including three men who were allegedly carrying the birds and a pair each of drivers and conductors of the bus, which was coming from Patna and was headed to Calcutta.

“We found six cages loaded in the boot of the bus. The birds were crammed inside the cages. Most of them were a few days old. Their wings are still to be developed. Some of the birds died of suffocation. The number of live birds is 458,” said Debasish Sharma, the divisional forest official of Burdwan. “This is the time for parakeets to hatch,” he said.

The birds were headed to several areas of the city, including Galiff Street in north Calcutta where birds are sold on Sundays, forest officials said. Trading in indigenous parakeets is prohibited under the Wildlife Protection Act.

Based on a tip-off, men from the Wildlife Crime Control Bureau and the forest divisions of Durgapur and Burdwan stopped the bus near the Benachity market in Durgapur around 4am, said a local forest official.

Preliminary investigations have revealed that the men had boarded the bus from Garhwa in Jharkhand.

The forest officials have stepped up crackdown on trade in birds, resulting in many seizures in and around Calcutta. “But for each seizure, many more such consignments reach the markets unnoticed,” said a senior official.