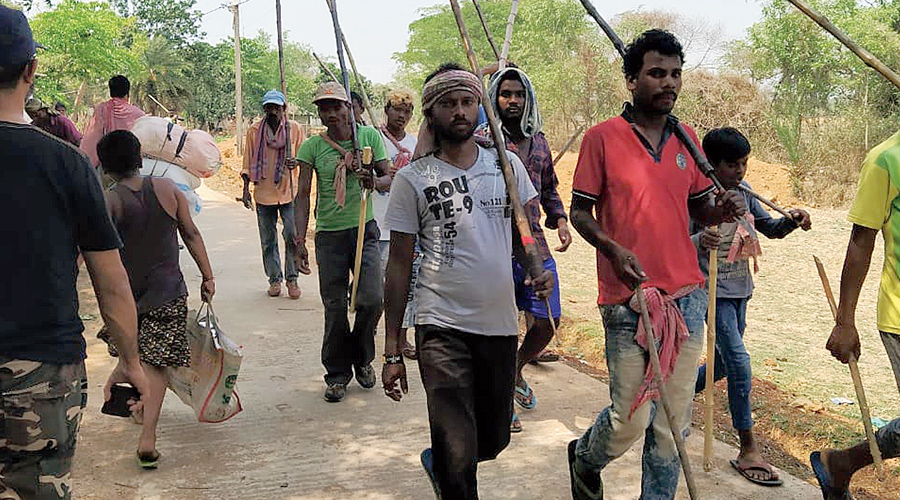 A hunting festival in West Midnapore has killed birds of two species described as “iconic” by birdwatchers among a wide range of other wildlife.

April 21 was one of the several dates of ritual hunting in the southwestern districts of Bengal — West Midnapore, Bankura, Jhargram and Purulia. The calendar started from April 3.

The Indian pitta’s dazzling appearance makes it a hot favourite in magazine covers, stamps and cellphone wallpapers. A picture of an Indian pitta adorns the 13th edition of The Book on Indian Birds by Salim Ali, the renowned ornithologist and naturalist.

The many names the bird has inspired — in Bengali, it is called Barnali and Navrang (because of its nine colours) in north India — are a testament to its popularity.

The black francolin is jet black in colour with streaks of gold and white cheek patches and a touch of copper near the collar.

“Both are endemic birds. The pitta is still found very rarely in urban areas, the black francolins found in arid grasslands, forests and agricultural tracts. An Indian pitta has recently landed in Rabindra Sarobar. Till the renewed surge in Covid-19 cases, scores of birdwatchers flocked the lake and waited for hours to get a picture of the bird. Both the Indian pitta and the black francolin are prized clicks for birders,” said birdwatcher Sujan Chatterjee.

Arka Sarkar of HEAL (Human and Environment Alliance League), an NGO, was in West Midnapore on Wednesday to track the alleged hunters.

“Till a year or two ago, every hunting session was followed by a congregation of hunters. They assembled the kill, drank and feasted on the cooked meat. A drive undertaken by the forest department has forced the hunters to curb the number of congregations. We could only see two such assemblies with scores of birds and animals — wild boars and hares. But it was only a fraction of the total animals killed,” he said.

Animal activists also said that thousands of people gathered for the hunting rituals with scant regard for social distancing. The pointed out that bushmeat consumption is dangerous at the times of the Covid-19 pandemic.

A Calcutta High Court order in 2019 put a complete embargo on ritual hunting in various districts of south-western Bengal. The court directed the civil administration as well as the police authorities to provide all possible cooperation to the chief wildlife warden to stop the hunts.

Recently, in an order dated March 21 this year, the court reiterated its earlier stand, saying that all such illegal activities have to be completely stopped by the state by exercising police power, if needed.

Sources in the forest department said any “stern action” against the alleged tribal hunters was unlikely in the election season.

“We are trying our best despite staff shortage because of the election. The police are also busy with the polls. We have set up nakas (check points) at roads leading to the forests. We have also done a lot of awareness camps with local tribal leaders and residents. The incidents of hunting have come down. But the forests are fragmented and some stray incidents are being reported. We are looking into them,” said V.K. Yadav, the chief wildlife warden of Bengal.