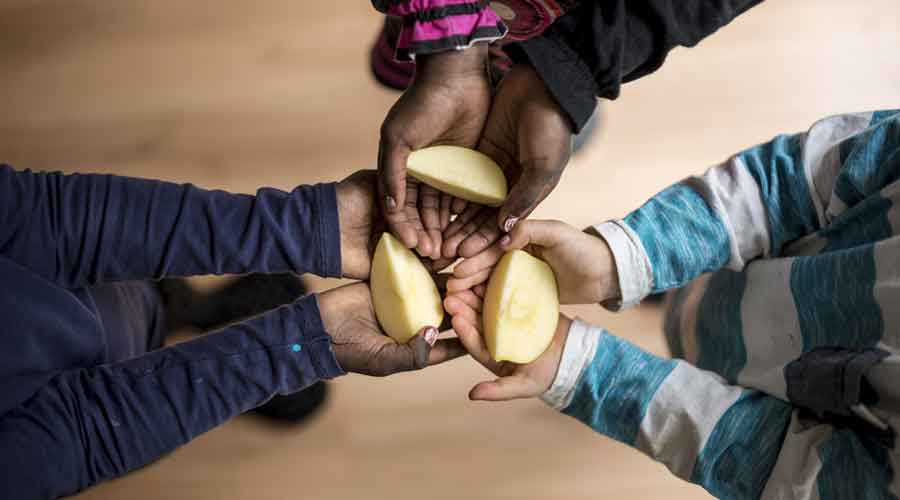 The campaign, “Share Your Food”, is a joint initiative of the West Bengal Commission for Protection of Child Rights in association with Unicef
Shutterstock
Jhinuk Mazumdar   |   Calcutta   |   Published 22.10.20, 01:33 AM

The state child rights commission, in association with puja committees, will spread awareness in the city on sharing food this festive season.

The campaign, “Share Your Food”, is a joint initiative of the West Bengal Commission for Protection of Child Rights in association with Unicef.

Posters in Bengali and English will be put up outside puja pandals to draw the attention of parents and children and to make them aware of the need to share their food with others, especially those who cannot afford.

The campaign, endorsed by chief minister Mamata Banerjee, was launched on social media in July to “inspire children to develop a habit of sharing food with others, especially with the underprivileged”.

Sharing is considered to be one of the best practices that should be learnt from childhood, according to the commission.

The commission felt the message needed to be reiterated during Durga Puja, which is a time for sharing. The campaign is part of the commission’s various initiatives to spread awareness on child rights and child safety.

“There are many who order more than they can eat and there are others who have nothing to eat. The campaign is to make children realise they should not waste food… and what better time to spread this message because puja is a time for sharing,” Yashabanti Sreemany, a commission member coordinating the campaign, said. “We approached some puja committees and they accepted our proposal.”

Posters will be fixed outside at least 16 puja pandals in the city.

The posters have messages such as “Food for everyone, lot more fun”; “Helping a friend makes me feel real grown up,”; “I care, I share”; and “Doing my little bit to feed the hungry”, which has a picture of a boy preparing food packets.

Subrata Mukherjee, the president of Ekdalia Evergreen, said the posters would help spread awareness among people. “Sharing is a social concept and it should be encouraged. We will put up the posters in such a way that they are visible to people passing by as well.”

Anjan Ukil, the general secretary of Ballygunge Cultural Association, said the posters would be outside the pandal. “That way one need not enter the pandal to see them. It will be visible even to those who are driving past or walking by the area.”

“The pandemic has had an impact on everyone, especially the underprivileged. Others need to reach out to them… teach children the need to reach out,” Debasis Kumar, the general secretary of Tridhara Akalbodhan, said.