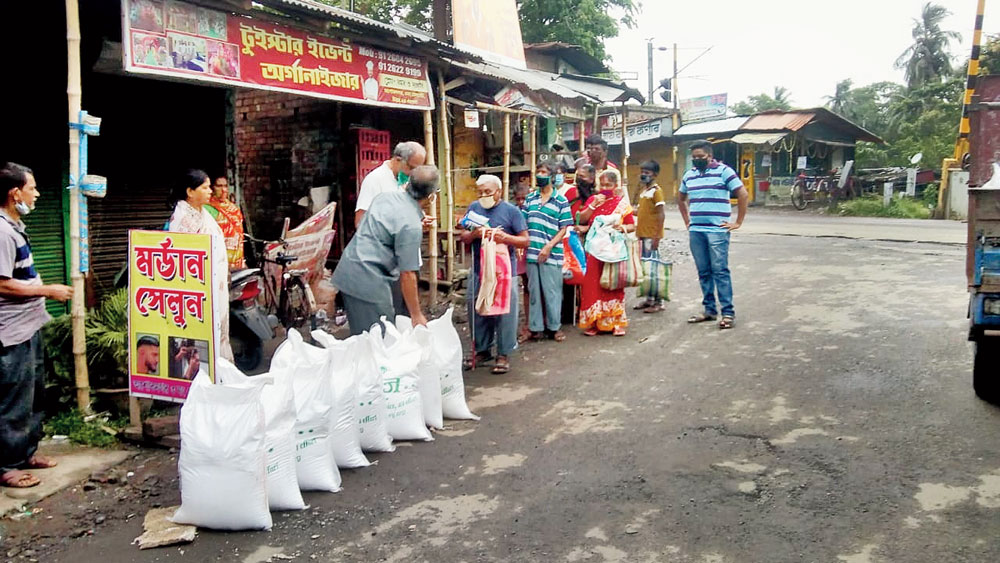 Sixty people with visual impairment, out-of-work because of the lockdown, got a few days’ dry ration from two NGOs on Saturday.

Many of the recipients used to sell different items on local trains in the Sealdah North section.

The distribution of ration was held at several pockets in north Calcutta and North 24-Parganas — Dum Dum, Baguiati, Madhyamgram, Barasat, Duttapukur and Habra, among others. A similar drive was held on the southern fringes earlier this month.

Shibnath Bera, one of the recipients of ration, sells chanachur on local trains on the Sealdah-Bongaon line. “I have been living on support from NGOs for the past two months. My savings lasted till the middle of April,” said the 50-year-old resident of Duttapukur in North 24-Parganas. His wife is visually impaired, too.

Bera leads an amateur theatre group comprising people with various degrees of visual impairment. No one now calls the group for shows because of the lockdown.

On Saturday, each recipient got a kit containing rice, daal, potatoes, oil, soybeans and biscuits. A pair of masks was given to each recipient, too.

“We will try to provide livelihood support to these people,” said Romen Ningthoujam, a representative of Goonj, the NGO that provided the kits.

The recipients were selected by The Society For The Welfare Of The Blind, a non-profit that works for the uplift of people with visual impairment. It runs a home for students in Ranaghat, in Nadia district, and pays monthly stipends to over a dozen female students.

“Once train services resume, we plan to buy some stuff for the hawkers to sell in the initial phase,” said Biswajit Ghosh, the secretary of The Society For The Welfare Of The Blind and principal of the Ramakrishna Mission Blind Boys Academy in Narendrapur.

The NGO gave Rs 300 to each recipient.