Passengers from Bangladesh chased and quarantined after landing at Calcutta airport 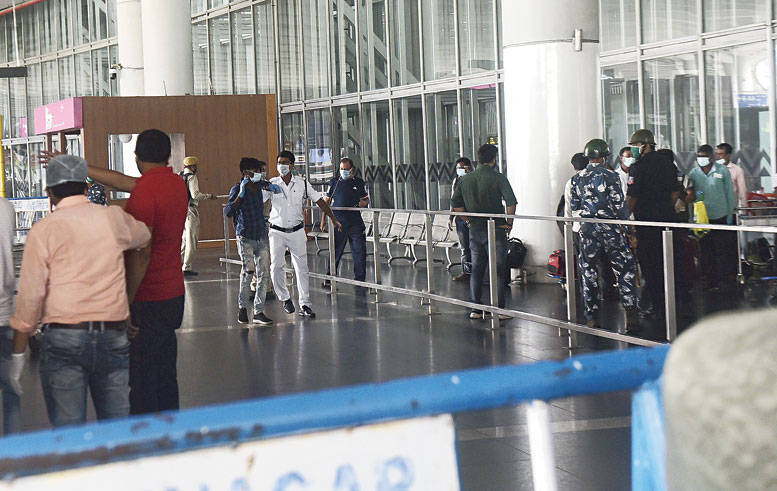 A passenger who arrived in the city from Bangladesh on Saturday tries to leave the airport instead of going to a government-run quarantine centre. A policeman catches him
Pictures by Bishwarup Dutta
Snehal Sengupta   |   Calcutta   |   Published 28.06.20, 02:24 AM

Several people who arrived in the city from Bangladesh on Saturday played cat and mouse with police at the airport terminal to avoid going to a quarantine facility.

A US Bangla Airlines flight with 164 evacuees on board arrived at the Calcutta airport from Dhaka in the morning. Most of the passengers — mostly labourers without work for months because of Covid-19 — refused to go to any quarantine centre and wanted to return home.

Cops first pleaded with them and then gave chase with raised batons after many tried to make a run for it. They managed to catch those who tried to run away and put them on two buses that took them to a government-run quarantine centre off the Bypass.

The government, in an attempt to restrict the spread of the coronavirus, has made it mandatory for all those flying back from abroad to spend a week at a paid quarantine centre and a week thereafter in home isolation.

“We decided to deploy a strong police contingent to ensure people follow quarantine rules. The quarantine protocol is being followed across the country and we can’t be an exception and allow people to return home putting others at risk,” J. Mercy, deputy commissioner, airport, the Bidhannagar commissionerate, said.

The Telegraph was present at the airport when the Bangladesh flight landed. A group of passengers stepped out of the building, arguing loudly with cops and government officials. They sat on the floor once officials told them that they could not be allowed to return home.

A few men in their late 20s tried to make a dash for it through the crash barriers and were chased by RAF personnel and an officer who caught up with them before they could breach the holding area.

The Telegraph had reported on Saturday that Bengal had asked the Centre to stop international evacuation flights to Calcutta unless it ensured passengers had booked paid quarantine facilities for themselves before boarding a flight.

The move followed instances of fliers heading home and not a quarantine unit from the airport.

The policeman makes the passenger board a bus to the quarantine centre.

This newspaper had written on Thursday about a fiasco over 143 fliers from Malaysia who refused to go to any paid quarantine centre after landing at the airport around 7pm on Tuesday and instead headed home.

The passengers, who were mostly labourers without work, had sat on the floor in the arrival section for close to seven hours before being allowed to leave.

On Friday, it was decided that all evacuees would be told to book a paid quarantine unit and would be taken to the arrival lounge in groups of 20.

“The fact that smaller groups of fliers were brought out in phases ensured we could easily put them on buses though most did not want to go to a quarantine unit,” an airport official said.

A flight from the US landed at the airport on Saturday afternoon while another carrying stranded Indians from Hong Kong landed at night, the official said.

Last week, all 140 passengers on a flight from Kyrgyzstan had refused to go to a paid quarantine unit and left for home. A similar scene had unfolded at the airport on Thursday night, too, after an Air India flight with 157 evacuees from Kyrgyzstan landed around 9pm. The passengers, mostly medical students, refused to go to any paid quarantine unit and had to be allowed to return home.