The Solid Waste Management Rules, 2016, applicable across the country had mandated that household waste be segregated at source 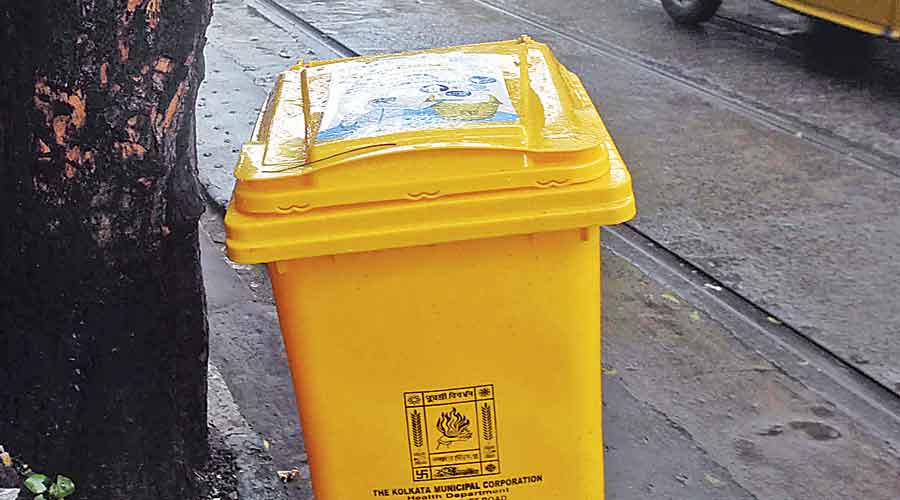 The yellow bins put up across Calcutta to collect Covid waste have been filled with food, vegetables and construction waste.

Cleaners of the private agency that has received the contract to clean the yellow bins were stumped when they went to clear them in some places on Friday. The bins were filled with fruit peels, vegetables, cooked and discarded food.

The Calcutta Municipal Corporation has installed 2,000 such bins across the city.

The bins have clearly written on them what can be dumped but people haven't followed it, an official of the private agency said.

The dumping of kitchen waste in the bins shows the lack of waste segregation culture in Calcutta where all kinds of waste are packed together and dumped in wheeled carts every morning.

“People should dump only biomedical waste in these yellow bins. They should throw their used masks, face shields, hand gloves and PPEs in these bins. The bins are not meant for kitchen waste,” Ramakant Burman, the managing director of GreenTech Environ, the private agency, said.

The Solid Waste Management Rules, 2016, applicable across the country had mandated that household waste be segregated at source. The waste must be divided into biodegradable, non-biodegradable and domestic hazardous waste.

But the segregation did not take off in Calcutta barring in seven wards in the Calcutta municipal area. The CMC is now extending the segregation at source infrastructure in 20 more wards. Still that covers only 27 of the 144 wards of the CMC.

Sourabh Manuja, a fellow at the Centre for Waste Management at The Energy and Resources Institute, said the municipal corporation should conduct an extensive awareness campaign to let people know the purpose of the yellow bins. “Effective waste management is dependent on awareness among people.”

Greentech Environ is collecting biomedical waste from close to 4,000 homes where Covid patients with mild symptoms are in home isolation.

The company is charging Rs 500 for each yellow bin. It will get an additional payment if the weight of the waste in a bin exceeds 1kg, an official of the company said.