Of the 2,623 students who were to appear for the exam on Tuesday at the two centres, only 771 turned up 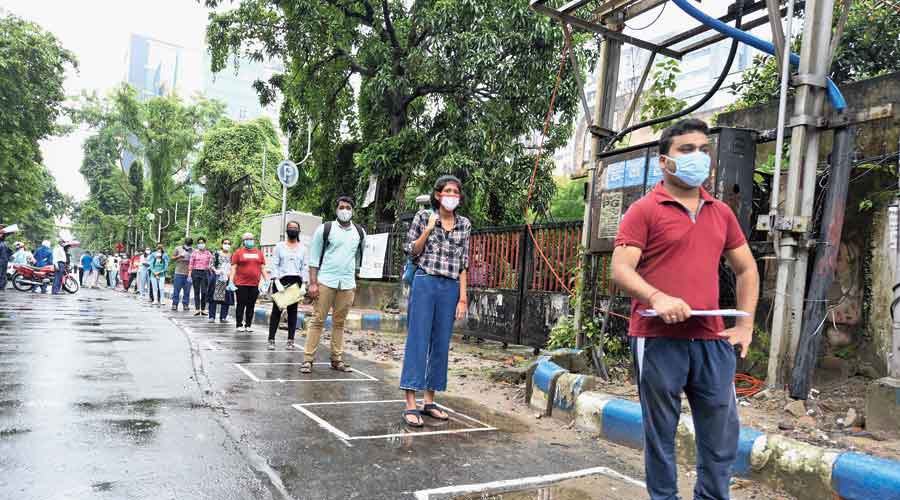 As many as 70 per cent of the students did not turn up on the first day of the Joint Entrance Examination (Main) in the two centres in Calcutta.

Of the 2,623 students who were to appear for the exam on Tuesday at the two centres, only 771 turned up, said officials associated with the exams. The centres are TCS Gitobitan in Salt Lake and the Institute of Instrumentation & Metrology in Belghoria.

The centre in Salt Lake had exams in two shifts and the one in Belghoria, about 15km north from the heart of Calcutta, had only one shift. In one of the shifts at the Salt Lake centre, more than 1,000 students did not turn up.

Tuesday’s tests were for B.Planning and B.Arch. The JEE (Main), through which most engineering colleges admit students, will continue till the end of the week.

Some students felt the exams should have been conducted in April, when there were far fewer Covid-19 patients.

“There are so many cases around now. Hence, chances of contracting the virus are also more,” said Diya Mukherjee, who travelled from New Alipore to Salt Lake. “It is uncomfortable writing a test for three hours wearing a mask and gloves. The hands became greasy and there was the constant fear of infection at the back of my mind.”

Diya, who was a student of Delhi Public School Ruby Park, appeared for the B.Arch exam on Tuesday but will not write Wednesday’s exam.

“While I was coming out I saw many students waiting outside. I decided not to come back on Wednesday because there will be more candidates and greater risk,” she said.

Some examinees complained about the quality of masks given at the exam centres. “What I usually wear is better than the one I was given at the centre,” an examinee said.

Candidates arrived from across the city as well as several districts. Many had to shell out a substantial amount to reach the venue by hiring vehicles, while others had no option but to travel in crowded public vehicles.

Candidate Rahul Kundu and his father started at dawn from Midnapore, took a bus to Howrah and then an app cab to Salt Lake.

The Telegraph reported on Monday that some examinees had decided to stay away from JEE (Main) because of the fear of contracting Covid-19. Those who decided to appear in the exam were scrambling to hire vehicles so they could travel without exposing themselves to the risk of catching the coronavirus. 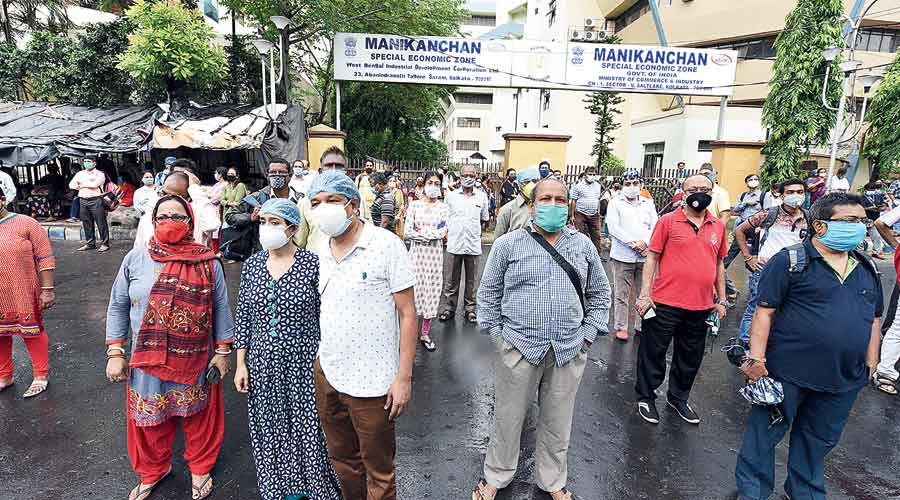 But not everyone can stretch their limits, especially in the midst of a pandemic, and hire a vehicle. Vivekananda Kundu, who accompanied son Rahul to the Salt Lake exam centre, said the bus was crowded and they were exposed to the risk of infection.

“No social distancing norms were being maintained on the bus. But we had no other option. It took us about four hours to reach Howrah,” said Vivekananda.

The Kundus will spend Tuesday night at a hotel in Esplanade because Rahul has another exam on Wednesday. “He has been preparing for this exam and we did not want him to lose a year,” the father said.

At the Salt Lake centre, announcements were being made to not crowd at the gate, maintain distance from one another and wear masks. The body temperature of every candidate was measured with a thermal scanner.

“Fewer students came today compared to last year. More rooms have been allotted this time to maintain social distancing,” said an official at the centre.

Students coming out of the centre said they were assigned alternate computers so a safe distance between two was maintained.