Distribution of essential items such as rice, flour, toiletries and masks among the affected families began on Monday 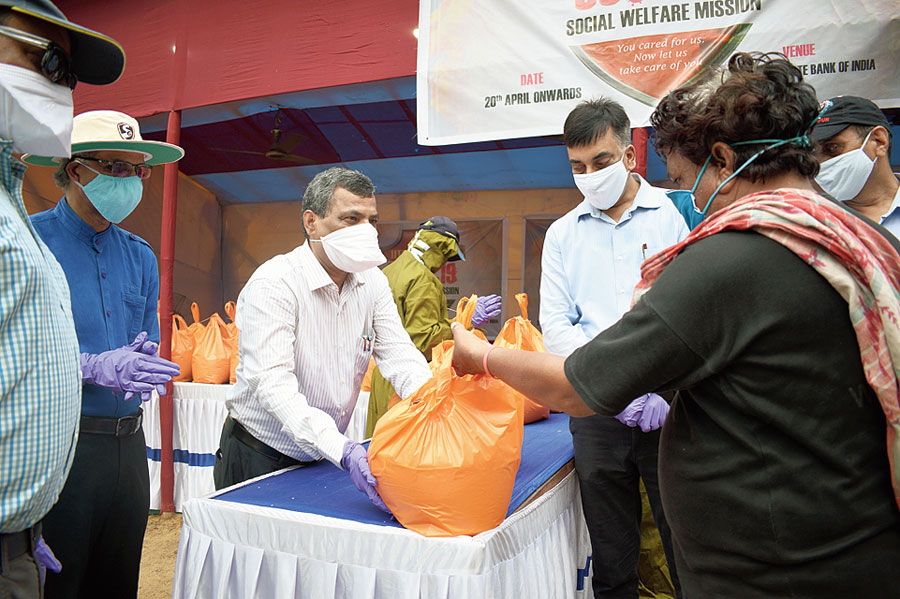 IIT-Kharagpur alumni based in the US have reached out to help workers at their alma mater who have lost their livelihood because of the lockdown.

The alumni have raised $2,42,000 (around Rs 1.86 crore) to help daily wage earners working at the eateries and tea shops on the campus, ward boys, washermen, rickshaw- pullers, domestic help and construction workers on the 2,100-acre campus rendered jobless by the lockdown.

An estimated 10,500 people have been hit by the closure and the corpus is meant to help them, an IIT official said.

Distribution of essential items such as rice, flour, toiletries and masks among the affected families, many of who live in nearby villages, began on Monday. Over the past two days, 225 people have been provided essentials, IIT Kharagpur registrar B.N. Singh said.

“The distribution will be in phases. We are calling a few people at a time to maintain social distancing,” Singh said.

The idea of creating the fund came from IIT old boy Vinod Gupta, who contributed $1,00,000 (around Rs 76 lakh) to the corpus. A US-based entrepreneur, philanthropist and 1967-batch alumnus, Gupta has funded the management and law schools of IIT Kharagpur along with chair professorship.

It was Gupta’s idea that help should be extended over a period of six months as the impact of the lockdown would be far-reaching, another IIT official said.

“Activities at IIT Kharagpur revolve around the students, most of who have left the campus. Those who are still on the campus will go home once the lockdown is lifted. Then the summer vacation will start from May 10 and continue till mid-June. So the workers would have to suffer the impact for quite some time,” the official said.

A corpus to the tune of Rs 8 crore would be required to keep helping such a large population for a period of six months, an official said.

“The alumni community in the US hopes to raise about Rs 8 crore to help those facing hardships,” Gupta said. “When I took ill during my days at IIT, the guy who took care of me was the ward boy in Patel Hall and his name was Papaya. I still remember him. It (the help) just shows how important they have been in our lives.”

The IITKGP Foundation in the US, led by president Ranbir Gupta, is running the fund-raising campaign. Among the alumni donors are Ranbir Gupta, Arjun Malhotra, R.N. Mukhija, Rakesh Gupta and over 100 donors from 1959 to 2017 batches.

Director Tewari urged every “Kgpian” (IIT Kharagpur students) to support this noble cause.

“This is the time to reminisce your days at the halls of residence and your adda at the night canteens and the faces who served you that cup of tea and bread,” he said.

Tewari appreciated Gupta for taking the lead and creating this fund to help people who are facing hard times.