CMC grants permission with Covid-19 rider that ban may return 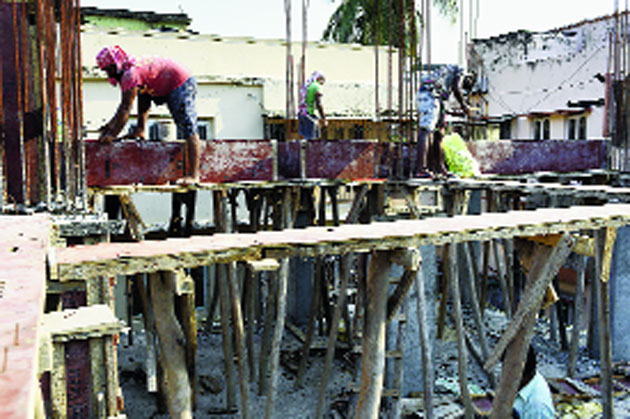 As many as 129 construction and renovation projects got the Calcutta Municipal Corporation’s permission to resume work over the past week.

The civic body has told the builders that the workers have to stay at the construction site and cannot step out. Also, no construction material — bricks, cement, sand or steel — can be procured from outside and work has to be done with materials present at the site, an official of the civic body said.

CMC officials said they had received applications from 265 projects and only the ones that were outside containment zones had been allowed to resume work.

If the area where a project has been allowed turns into a containment zone, after a resident tests positive for Covid-19, work has to be stopped immediately.

“If police find that any condition has been violated, they can stop work or inform us. Also, if the area becomes a containment zone, work has to be stopped immediately,” said the official.

Some realtors said work on large-scale projects is unlikely to begin soon. “Material supply is a concern. Besides, till the time transport is allowed on a greater scale, workers cannot come. Most of them stay in districts and have gone back home,” said Nandu Belani, the president of the Bengal chapter of the Confederation of Real Estate Developers’ Associations of India (Credai).

Vivek Ruia, who has resumed work on his project at South End Park in Dhakuria, said: “We provided the workers with food and other necessities. Now that the permission has been granted, they are working on casting a floor.”

CMC officials said usually half the original workforce was being allowed to stay at any site now.

While granting permission for resumption of work, the CMC is making the builder sign an undertaking that they would abide by all conditions.

The conditions state that workers will maintain physical distancing and wear masks. The work site should have pictorial instructions on safety measures and there should be a daily drill on the measures to be followed.

Besides, the builder must create an isolation facility and withdraw from work anyone who shows symptoms of Covid-19 and immediately alert the police or the CMC’s health clinic.