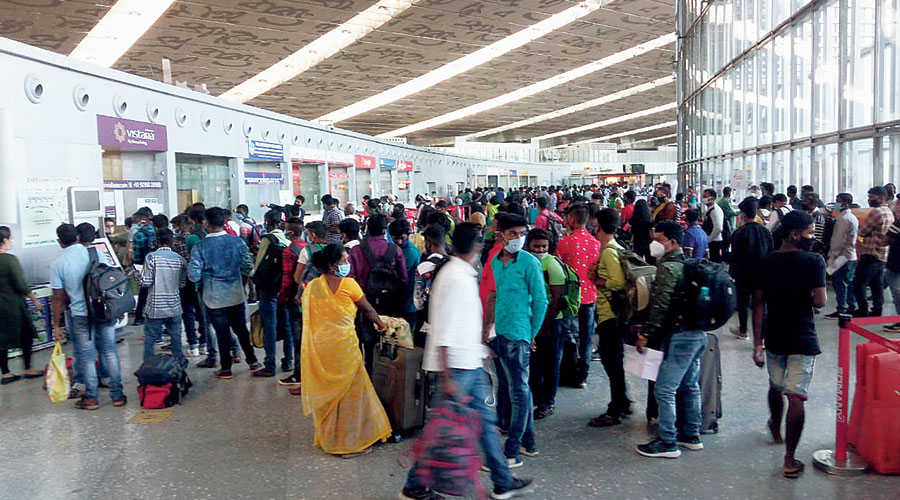 The airport had on Tuesday witnessed congestion at the entry to the terminal and security check counters. On Thursday, the congestion shifted to gate 3C, in front of the ticket counters of various airlines.

The airport authorities and airlines deployed additional personnel at the entrances and extra scanning equipment at the security check counters to clear the rush on the second day flights operated between Calcutta and six other Indian cities, including Delhi and Mumbai, since resumption on September 1.

Hundreds of passengers on Thursday were found not carrying smartphones or the necessary app and travel documents on their smartphones. These passengers were then redirected to gate number 3C at the departure level of the terminal building, where the airlines have their ticket counters.

“These passengers, all first-time fliers, were taken to gate 3C, where airlines helped them with the documents. Those who did not have smartphones and so could not download Aarogya Setu app were given self-declaration forms on their health conditions. Others were helped by airline staff to get web check-in done,” said an official of a private airline.

It was taking nearly an hour on an average for most passengers to complete the formalities.

“On Tuesday, there was a crowd build-up outside the entry gates. On Thursday, the crowd shifted to gate 3C. Those who had all the documents entered the terminal without any hassle on Thursday,” said the official.

On Tuesday, hundreds of passengers missed flights and several flights were delayed because of lack of passengers. Many had blamed the chaos on lack of preparedness on the part of the airport authorities despite the number of departing flights jumping from 60 to 92.

Asked about the congestion, an airport official had said on Tuesday: “A large number of the passengers who had booked tickets on resumed flights are first-time fliers. They did not have required documents or apps and that led to congestions at the entrance.”

Flights to Calcutta from Delhi, Mumbai, Chennai, Ahmedabad, Pune and Nagpur had been suspended on July 6, following a request from the Bengal government, because of high Covid prevalence there. The flights resumed on Tuesday.

After Tuesday’s chaos, officials of the airport and airlines conducted a survey on Wednesday to find out possible solutions.

As part of the plan, it was decided that airline employees and security personnel would identify first-time passengers and help them. But that led to the congestion at gate 3C.

“We have appealed to the airport authorities to allow these first-time fliers to show their tickets at the gate and enter the terminal. Inside, the airlines can assist them. Inside the terminal there is a lot of space. Because of the congestion at gate 3C, social distancing could not be maintained,” said a representative of the airline operators’ committee at the airport.

“The airlines have verbally appealed to us (to relax the rule for first-time fliers). But because this is against the safety norms laid down by the Centre, we need a formal application from them. We will then consider it on humanitarian grounds,” said airport director Kaushik Bhattacharya.

The congestion was much less at the security check-in area on Thursday because of additional equipment to scan hand baggage, Bhattacharya said.

The number of X-ray counters with faster automatic tray retrieval system was increased from two till Wednesday to four on Thursday.