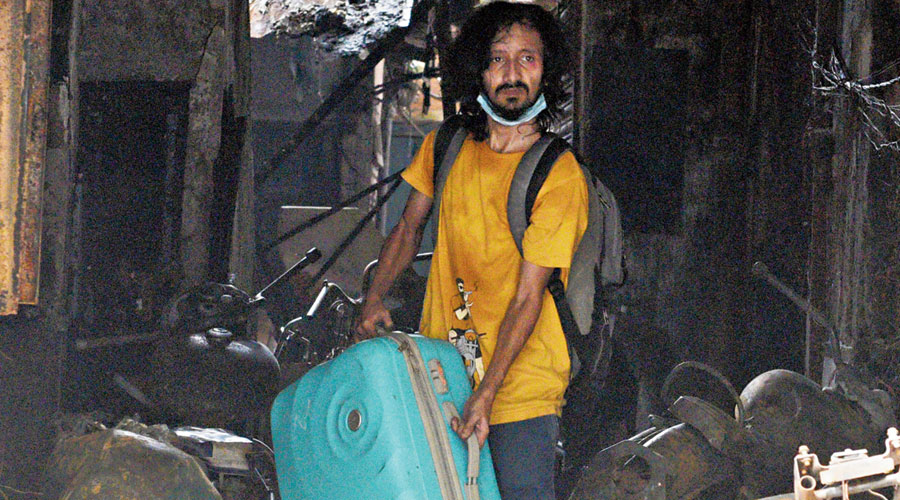 Living space damaged, electric connection snapped and the only wooden lift completely burnt — 50-odd families of the fire-ravaged Moon House at 21 Ganesh Chandra Avenue struggled throughout Sunday trying to retrieve whatever little they could lay their hands on.

Since late on Friday, when the fire broke out in the metre room on the ground floor of the seven-storey building, the structure had been cordoned off and no one was allowed to enter.

The curb was relaxed on Sunday, from morning till afternoon. Two members from each family were allowed to visit their flats for a brief period and no one was allowed to remove any heavy item.

“We are not sure whether the building is fit for living. We will decide on whether the residents can move back in after the forensic experts finish their inspection,” a police officer said. “The building will have to be cleared and marked safe to enter before residents can be allowed in.”

The fire, which broke out around 10.15pm on Friday, killed two residents - a 65-year-old woman and a 12-year-old boy — and left several others injured. Around 20 fire tenders took over six hours to control the blaze.

Residents of Moon House have since shifted to relatives’ houses in Bowbazar and other parts of the city. On Sunday they returned to the building to pick up clothes, valuables and cash while gearing up for the uncertainty spawned by the fire.

“My cousin’s marriage is scheduled for November 1 and several items meant for the groom’s family were in our flat. My sisters could retrieve some clothes and a few jewellery items,” said Gulzar Alam, a resident of the top floor of the building. “Where will we stay? How will we prepare for the wedding? Life has suddenly become very uncertain.”

Police said they would like to consult with civic engineers on whether the building was fit for living any more. The heat from the fire, which raged for several hours, had eaten into several parts of the building and officers said they would not take a risk by allowing residents to return to Moon House without the consent of a competent authority. 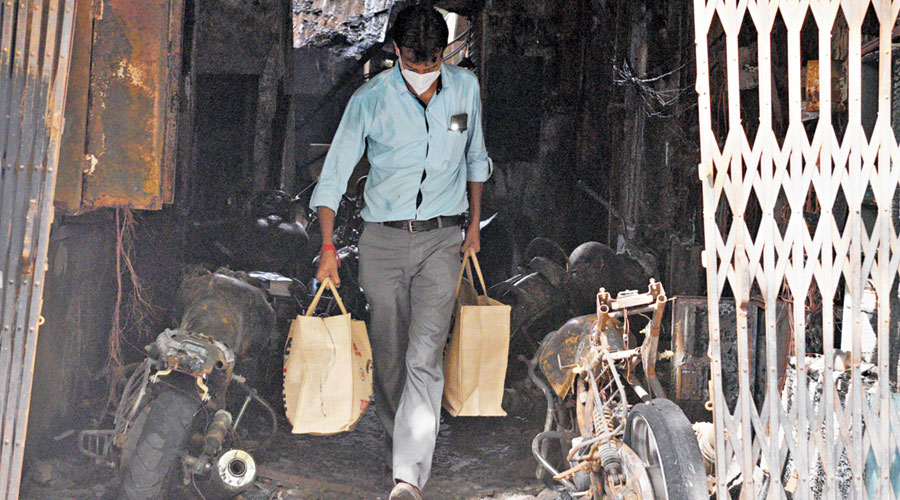 Another resident of Moon House at 21 Ganesh Chandra Avenue come out of the building with whatever could be salvaged on Sunday.
Pradip Sanyal

An official of the Calcutta Municipal Corporation (CMC) said the civic body was yet to receive any formal request from the police about Moon House. If such a request comes, the CMC asks the owners and tenants to get the building inspected by a certified structural engineer.

“We have received no request from any agency about the fire-hit building on GC Avenue,” said the official. “The fire brigade, CESC and the police have the primary responsibility to decide whether people could be allowed back in a fire-ravaged building. The CMC gets involved if these agencies approach us and seek our opinion on whether the structure is fit to live in.”

Many tenants said the building had been neglected for decades and alleged that the landlord had refused to spend on maintenance.

“Around four years ago, officers from the fire services department had asked the landlord to make arrangements for installing fire safety gadgets. But no such effort was made,” alleged Manwar Khan, a resident who had shifted to his relative’s family in Tollygunge.

“The space leading to the stairs on the ground floor was rented out to two-wheelers for parking.”

Investigating officers said the owner had told them that electric cables were replaced a few years back and talks were on to increase the overhead storage capacity of tanks to fight any emergency.

The building does have an underground reservoir, which apparently had water when the fire broke out. But fire-fighters said they couldn't access it because the keys were not available.

“We are trying to find out how a part of the building's main entrance was converted into a garage,” a police officer said.