Message on equality for girls 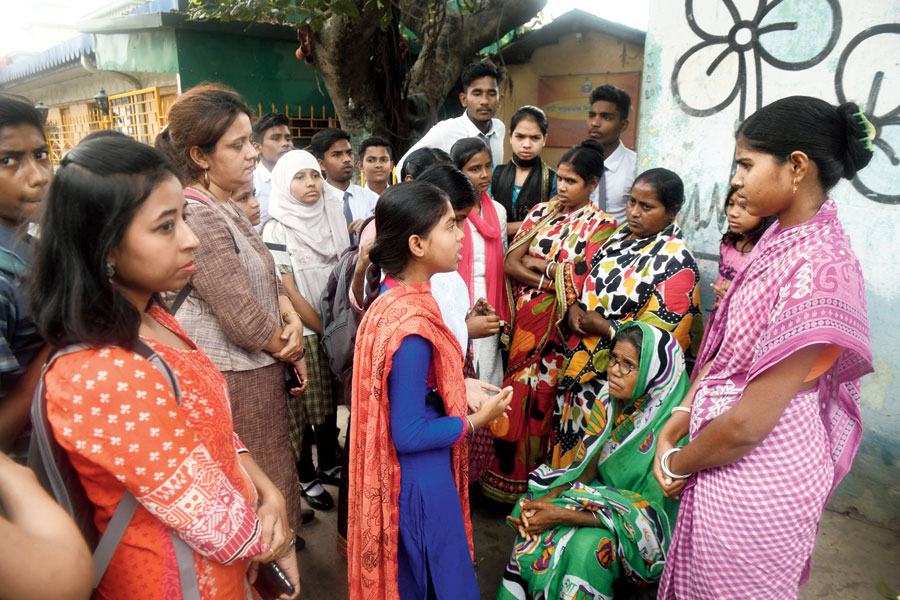 Teenaged girls and boys urged adults to let their daughters complete their education and be financially independent instead of getting them married off early.

The students, many of whom face discrimination at home or have to overcome challenges to attend school, visited a community on the banks of a canal in Bagbazar on Friday afternoon and spoke to women who work as domestic help and their husbands, many of them van rickshaw pullers or porters.

The community visit was an initiative of the NGO Calcutta Rescue that works with children aged four till the time they start earning.

The NGO conducted an Each for Equal programme on Friday to mark International Women’s Day, which falls on March 8.

“You have to let girls study so that they become financially independent. Even if they get married, they will not be dependent on anyone else if they have a job and will have a stronger voice at home as well,” said Faraha Tarannum, a Class XI student of commerce.

The students told the parents, mostly mothers, to let their children go to school and give their sons and daughters equal opportunities, instead of keeping the girls at home to do the household chores while the parents go out to earn a living.

Many shared how education had changed their lives.

“One of my brothers quit studies in Class VIII and started working in a shop in Bagri Market, where my father goes. But my sister, who is studying master’s, keeps telling me that I should not get distracted and complete my education so that I can get a job I want, not one that is forced on me,” said Khadiza Khatoon, 15, who wants to be a software engineer.

Sushmita Das, 16, who has appeared for Madhyamik this year, urged parents to explain to daughters the importance of going to school. “Only education and employment will give them a better life,” she said.

Samapika Dhali, 15, who appeared for Madhyamik this year, shared how she was discriminated against at home. “My brother and I don’t have the same freedom. If I have to go on a school trip I have to answer a lot of questions and at times permission is denied but it is not so for my brother,” she said.

Ananya Chatterjee, school administrator at Calcutta Rescue, said spreading the word through teenagers made a difference. “Most parents have teenaged children and when they see girls and boys with career goals, they are encouraged,” she said.

The students also took part in a poster-making competition on gender equality.

Class X student Soumyajit Routh painted a girl and a boy, both doctors, on a weighing scale to depict that they deserved equal pay.

Saba Sabir of Class X depicted how a woman is pulled down by responsibilities and is more vulnerable to abuse but she can be a sportsperson, a doctor or even a mechanic. Equality is not a female fight. It’s a human fight, was her message.