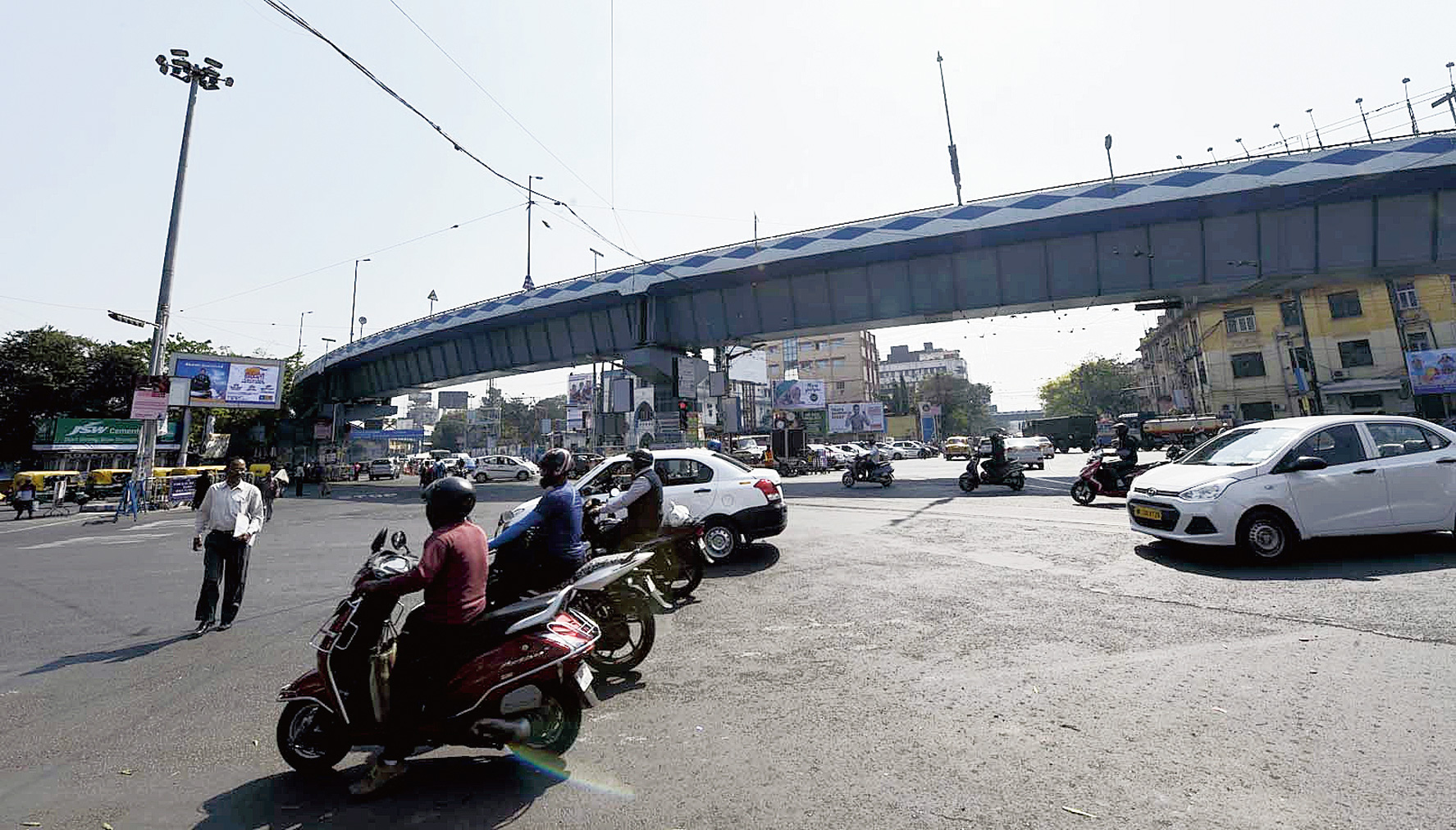 A resident of Narendrapur took only nine minutes to reach the Race Course crossing from Science City around 1.30pm on Tuesday by taking the new ramp connecting the Parama and AJC Bose Road flyovers.

Rewind to a month ago, it would take her the same time just to reach the AJC Bose Road flyover from the Parama flyover via the Park Circus seven-point crossing.

Tuesday was the first day since the ramp’s inauguration last Friday that traffic density resembled the usual weekday volume. Monday was a state government holiday.

Unlike most places in Calcutta where afternoon brings a respite from traffic pain, the Park Circus area is notorious for chaos on every road during that period. A dozen schools give over within a 2km radius of the crossing between 1pm and 2pm. According to a police officer, more than 2,000 cars descend on that zone in that one hour of traffic turmoil.

Since the 1.074km ramp of the Parama flyover opened, commuters have been able to go from the EM Bypass to the central business district and beyond by avoiding the seven-point crossing.

Before the inauguration of the ramp, anyone taking the Parama flyover from the EM Bypass had no option but to suffer the congestion at the seven-point crossing before going down Circus Avenue to hit the AJC Bose Road flyover.

“There are two traffic signals between the Parama and AJC Bose Road flyovers if you are not taking the ramp. If traffic is bad, the seven-point crossing is a nightmare. The new ramp has been a big relief. I no longer need to go through the crossing,” said the Narendrapur resident, who regularly crosses that area around 1.30pm on her way to central Calcutta.

The signals that used to hold up commuters are those at the Park Circus crossing and the intersection of Circus Avenue and Nasiruddin Road.

Another commuter recalled how it would sometimes take him up to 15 minutes to reach the AJC Bose Road flyover from the Park Circus end of the Parama flyover.

Since the ramp opened, the volume of traffic at the crossing has dipped. “About 60 per cent of cars getting on the Parama flyover from the EM Bypass are taking the ramp,” the police said.

The ramp has also made it possible for cars to take the Bypass-bound flank of the Parama flyover from the Park Circus crossing during daytime. Until last Friday, that was allowed only between 10pm and 9am.

The daytime restriction had been enforced five days after the flyover was inaugurated in October 2015. This was done as a stop-gap solution to the congestion at the Park Circus-end of the flyover, which was unable to handle the load in the absence of a ramp to share the burden of traffic dispersal.

While inaugurating the ramp, chief minister Mamata Banerjee unveiled a proposal to build another arm of the Parama flyover till Ballygunge Phari. The proposed ramp will branch off from near the Zeeshan crossing and terminate in front of Kalyan Jewellers, opposite The BSS School near Pantaloons.