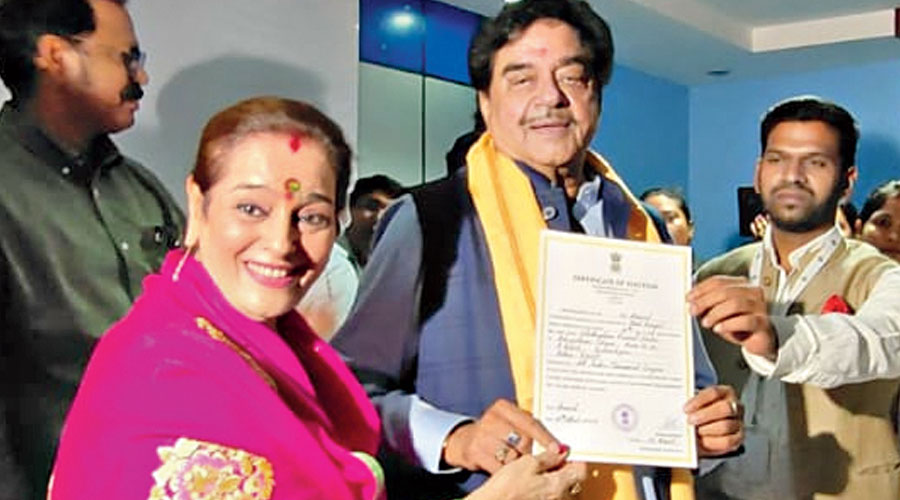 Trinamul Congress candidate Shatrughan Sinha scripted history in Asansol on Saturday as he wrested the seat that had sent BJP nominees to the Parliament twice since 2014, and Left and Congress candidates before that, for the party.

The actor-turned-politician defeated the BJP’s Agnimitra Paul by a margin of over 3lakh votes in the bypoll.

The bypoll in Asansol Lok Sabha was necessitated after Babul Supriyo, who had won in 2019 on a BJP ticket by over 1.97 lakh votes, resigned and joined Trinamul in September last year.

“This victory is dedicated to Mamata Banerjee and every functionary of Trinamul Congress, who worked tirelessly to ensure my victory. Mamata Banerjee is now the country's most popular leader. She will be a game changer in the 2024 general election and this is its beginning,” said Sinha after his victory.

The maiden victory of Trinamul from Asansol was expected in the backdrop of the overall political scenario in the state as it has witnessed a steady decline of the BJP’s vote share since the 2021 Assembly polls when it had got around 39 per cent of the polled votes across Bengal. Paul -- a sitting BJP MLA from Asansol South — could not secure a lead even from her constituency. She got little over 30 per cent of the polled votes in Asansol.

In comparison, the vote share of Trinamul in Asansol increased by 21 per cent from the 2019 general election as Sinha secured 56.6 percent of the polled votes. For the BJP, the slide in vote share is around 21 per cent since the last Lok Sabha polls.

Though Paul was graceful in defeat and accepted the verdict of the people — besides admitting the organisational deficiencies of the party — she didn’t forget to toe the party line.

“Everyone knows how Trinamul leaders intimidated voters here. People saw how I was attacked on the poll day.... But I will not roll out any excuses,” she said.

Several BJP leaders said in private that they were worried about the fall out of the bypoll result ahead of the next year’s rural polls.

“We produced a decent performance in the (last) rural polls in neighbouring Purulia and Bankura... This defeat will have an impact on our organisational strength as the rank and file will start doubting our ability to take on the Trinamul and this will surely cause an exodus in favour of the Trinamul,” said a local BJP leader.

Owing to its demography, the Asansol Lok Sabha area is often referred to as mini-India because of the presence of people from all over the country.

The region has 45 per cent Hindi-speaking voters and around 27 per cent Muslim electors, a majority of whom are Urdu-speaking. Around 1-lakh people, mostly Hindi speaking, work in the coal mines here.

Sinha, after his emphatic victory, said that the mandate reflected the inclusiveness of India, which gets reflected in Mamata’s secular brand of politics.

“Not only that, we (Trinamul) have one more seat in Parliament. The result  sends a message about the mood of the people before the 2024 Lok Sabha election,” said Sinha, stressing that the people of Asansol sent a message to the BJP.

In a news meet later in the evening, Sinha again stressed that the bypoll results across the country bore signs of an anti-BJP mood, which will further crystalise under the leadership of Mamata ahead of the 2024 polls.

Several Trinamul insiders said that Mamata fielded Sinha from Asansol for this purpose as she wanted to use his pan-India appeal to attack the Narendra Modi regime at the Centre.

“Sinha was with the BJP for long and everyone is aware of his animosity towards the Prime Minister... He will sit in the Opposition benches and attack the (Modi) government,” said a Trinamul leader. He added that Mamata Banerjee’s mission 2024 will also get a boost with Sinha’s victory. “We need such national faces like Shatrughan Sinha in our party to combat the BJP in Delhi,” he said.

Sinha added: “I will take Mamata Banerjee in Bihar and wherever she wants to go to strengthen Trinamul across the nation. She is a national leader in a true sense.”